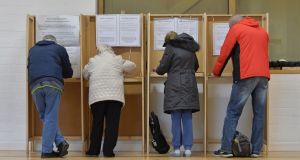 The writ has been moved in the Dáil to confirm four byelections on November 29th to replace TDs elected to the European parliament.

The byelection results will be seen as an indication of the support commanded by each party ahead of the general election expected in 2020.

According to last month’s Ipsos/MRBI poll in The Irish Times, Fine Gael has maintained a 4 per cent lead in support over Fianna Fáil, at 29 per cent compared to 25 per cent, with Sinn Féin at 14 per cent, Labour at 6 per cent and Independents at 26 per cent.

Government parties tend to lose byelections and the poll could also be seen as a verdict on Fianna Fáil as a supporter of the minority Government through its confidence and supply agreement with Fine Gael.

Minister for Local Government Eoghan Murphy expressed the wish that the elections would be “fair and respectful” and said “the democratic process demands it”.

Formal campaigning began on Thursday and all parties and groups used the opportunity in the Dáil to publicise their candidates and their campaign issues for the election.

Fianna Fáil whip Michael Moynihan moved the writ for Cork North-Central to replace Billy Kelleher, a TD since 1997 and “a valued colleague and friend”.

Sinn Féin deputy leader Pearse Doherty said the election was an opportunity to give the public an alternative to the failed politics of Fine Gael and Fianna Fáil and the “failed experiment of so-called new politics”.

Solidarity TD Mick Barry said the Government should not underestimate “the righteous anger” of the public at Fine Gael and Fianna Fáil, who created a society where 4,000 children had been made homeless but 3,000 others became millionaires last year.

Independents4Change TD Thomas Pringle, who moved the writs for the Dublin Fingal and Wexford byelections, described the current administration as focused on “short-term narrow-minded election-focused politics”, which had resulted in a record number of people homeless or paying rent and unlikely to ever own their own home.

He said Independents4Change would not have a candidate in the Wexford byelection, where Mr Wallace was the group’s TD, but would have one for the general election.

Social Democrats TD Catherine Murphy, who won a 2005 byelection, said she had focused on childcare in her campaign and subsequently the government put childcare measures in place.

She said byelections are an opportunity for the public to put items on the agenda that are not being properly discussed. She said it would be a “marker” to determine the kind of political agenda there will be in the run-up to the general election.