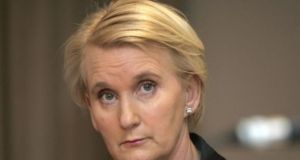 The controversial appointment of a former Fianna Fáil senator and lobbyist to the State’s ethics watchdog has been confirmed in a Dáil vote of 87 to 57.

Seven Regional Independent TDs and two of the Independent TDs’ group supported the three Coalition parties in the appointment of Geraldine Feeney to the Standards in Public Office Commission (Sipo).

Ms Feeney served as a Fianna Fáil senator from 2002 to 2011. Sinn Féin questioned her appointment because she subsequently served as a professional lobbyist and acted on behalf of the National Association of General Practitioners (NAGP).

Tánaiste Leo Varadkar is the subject of a Sipo complaint following his leaking of a confidential document to the president of the NAGP last year when he was taoiseach.

Sinn Féin questioned Ms Feeney’s appointment and the party’s finance spokesman Pearse Doherty said the adjudication of the complaint was one of the first matters the commission would have to deal with.

Taoiseach Micheál Martin told the Dáil on Tuesday however that Ms Feeney’s appointment complied with the legislation.

She had demonstrated fairness and integrity as a senator and had experience of regulatory affairs which would be an asset to the commission, he said.

Ms Feeny has been appointed as an ordinary member of the six-member commission, which must include a former member of the Oireachtas.

Former judge Mr Justice Garrett Sheehan has been appointed to chair the commission. They are filling two vacancies that arose in February.