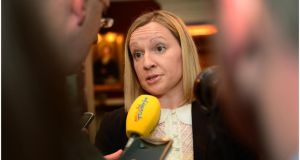 Minister of State for European Affairs Lucinda Creighton said she hopes to be able to support an amended version of the Government’s abortion legislation. Photograph: Bryan O’Brien / THE IRISH TIMES

Minister of State for European Affairs Lucinda Creighton has said she hopes to be able to vote for an amended version of the Government’s planned abortion legislation.

Speaking in Dublin this afternoon, Ms Creighton said Minister for Health James Reilly had given a “clear commitment” that he would take “concrete amendments” on board.

“It’s a long way until this legislation will be finalised. We have to obviously go through the process of committee. Obviously a number of ministers have made it clear that there will be a willingness to look at amendments to the legislation,” she said.

“It’s a long way to go and I’m not going to predict or preempt the outcome of the process. I’m very hopeful that ultimately it’ll be a Bill that I can support.

“We have a clear commitment from Minister James Reilly that he will take on board both the recommendations of the committee and concrete amendments that’ll be proposed. I take that in good faith. I’m a democrat and I’m also a parliamentarian so I have faith in the parliamentary process. You have to.”

Ms Creighton was speaking at an event to mark Europe Day at EUHouse in Dublin, which was also attended by Ireland’s EU Commissioner Maire Geoghegan-Quinn. Yesterday Ms Geoghegan-Quinn declared she would vote against the abolition of the Seanad in this year’s referendum, pitting herself against the Government on the central element of its reform agenda.

Ms Geoghegan-Quinn declined to expand on her remarks, but Ms Creighton said the Commissioner’s intervention had put an extra focus on the “healthy” debate on the future of the Upper House.

“I think we’re going to have a very healthy debate about the Seanad over the months ahead and I think it will be very interesting and I suppose she has sparked an extra focus on it now.”

Asked about former tánaiste and ex-minister for justice Michael McDowell’s intention to co-operate with some Seanad members to bring forward legislation to reform the Seanad, Ms Creighton said: “There’ll be a referendum on whether to abolish the Seanad or not. I don’t think there’s any intention in Government to introduce any amending legislation or anything of that sort.

“My expectation is that there’ll be a referendum in the autumn, don’t know a date yet. There’ll be plenty of opportunity for everybody to debate it and people to put forward all sorts of suggestions.

“It’ll be an interesting debate and I’m sure it’ll be very lively.”