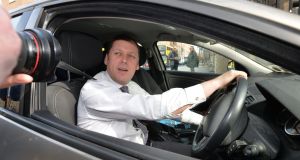 When contacted by The Irish Times on Monday, Barry Cowen said he had said all he was going to say about the matter and would make no further comment. Photograph: Alan Betson

Allegations that the Minister for Agriculture Barry Cowen did a U-turn before a Garda checkpoint in 2016 have led to demands from both Government colleagues and Opposition parties for him to answer further questions on his encounter with gardaí at that time.

He was driving home on a provisional licence from an All-Ireland football final when he was stopped and breathalysed. He was subsequently fined and banned from driving for three months, something he apologised for in the Dáil last week. He made no reference to allegations that he did a U-turn to try to evade the checkpoint when he addressed the House.

The Sunday Times at the weekend reported that the Garda record of the incident stated Mr Cowen had been “pursued by gardaí after doing a U-turn as he approached a checkpoint”.

The Fianna Fáil Minister has denied this happened and has claimed the Garda record on the Pulse system is “incorrect”. He has sought a copy of his records. A complaint by Mr Cowen about the leak has been referred to the Garda Síochána Ombudsman Commission.

Minister for Transport and Green Party leader Eamon Ryan said on Monday the story “isn’t going away” and there was a need for “further clarity” from Mr Cowen.

“I think further questions are being asked and I would imagine, and I think they should and will have to be answered,” he told RTÉ’s Drivetime on Monday.

Mr Ryan said he expected further clarity would be provided “within the coming days or weeks”, with one option being Mr Cowen responding to questions on the controversy in the Dáil.

Green Party deputy leader and Minister for Arts, Culture and Tourism Catherine Martin said while Mr Cowen had made a full apology last week, a further explanation was needed.

“More questions have arisen over the weekend, and more clarity is needed,” she told Newstalk on Monday.

Sinn Féin’s Louise O’Reilly said the fact there was a dispute between his account and that which is alleged to be in the Garda record showed the need for him to answer questions in the Dáil.

Independent TD Michael Healy-Rae also said the new disclosure had changed the circumstances and a statement was needed.

“He made a stupid mistake and he has apologised unreservedly. People make mistakes and it should not be held against them for the rest of their lives,” she said.

Taoiseach Micheál Martin is understood to have been aware since early last week of the Garda record and allegation that Mr Cowen did a U-turn before a checkpoint in 2016.

Sources said Mr Martin would have been made aware of the U-turn claim at the time that media queries were made. However, on Monday, the Taoiseach’s spokeswoman was not in a position to confirm if this was the case or to say if that information was passed on to the two other party leaders in the coalition, Leo Varadkar or Mr Ryan.

Mr Varadkar on Tuesday said Mr Cowen faced questions about allegedly attempting to avoid the Garda checkpoint but that he would wait until the outcome of the investigation before commenting further.

"I understand the gardaí are carrying out an investigation into that. At least until that investigation is done there probably isn't any more to say about it," he told RTÉ's Morning Ireland.

When contacted by The Irish Times on Monday, Mr Cowen said he had said all he was going to say about the matter and would make no further comment.

Mr Cowen’s Fianna Fáil colleague, Thomas Byrne, denied he was the source of the earlier leak about Mr Cowen’s three-month driving ban. Speaking on LMFM he challenged claims made by a Fianna Fáil activist in Meath on social media that he (Mr Byrne) had told him in a late-night telephone call he would tip off the media about the incident. While accepting the phone call had occurred, he said he could not possibly be the source of the leak.

“I think that’s very, very clear,” he said. “I think we now see that there’s a Garda investigation.

“There’s a civil matter in relation to this. It does not involve me. I’m on good terms with Barry Cowen,” he said.

Under Section 109 of the Road Traffic Act 1961 it is a criminal offence to contravene the requirement to stop a vehicle when required to do so by a garda.

The Garda Ombudsman’s office is expected to examine login records on the Garda Pulse system in an effort to determine who leaked information about the circumstances of Mr Cowen’s drink driving incident.

However, Garda sources expressed scepticism that any member would face sanction for leaking information that Mr Cowen allegedly tried to perform a U-turn before a drink driving checkpoint in an effort to avoid detection, an accusation the Offaly TD denies.

“It is one thing proving someone accessed the Pulse record. It’s quite another proving that that person was the leaker,” said a garda.

It is generally accepted that leaking such information would be a crime under the Garda Síochána Act 2005 but only if the leaker was a garda. Gsoc has no authority over non-Garda members.

The Ombudsman has received a notification about the matter but has yet to launch a full investigation. It is understood the referral is still in the assessment stage.