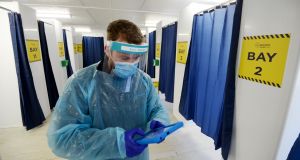 Mandatory quarantining of incoming travellers is not workable in the State because of the open Border with the North and because it would be disproportionate, Tánaiste Leo Varadkar has said.

The Tánaiste said there was a “very high degree of compliance” with the new mandatory requirement for incoming passengers to have a negative Covid-19 PCR test.

Files have been sent by gardaí to the DPP on people who have arrived without evidence of a negative test, he added.

Mr Varadkar also said the Government would resolve difficulties in relation to the sharing of the State’s passenger information with Northern Ireland.

Northern Ireland has repeatedly requested that the State share this information in order to allow it to follow up on passengers whose intended final destination is in the North. The Tánaiste said on Thursday there were issues in relation to the format and details of the North’s requests but “we will resolve that”.

Mr Varadkar was responding to Social Democrats TD Catherine Murphy, who said a “whopping” 49 per cent of incoming passengers failed to state where they would be staying on arrival when they filled out the required passenger locator form.

She said people in the Republic were being fined for travelling beyond 5km from their homes if they did not have a good reason for doing so, and “the contrast is not lost on the public”.

The Government had to act to deal with the situation, she said. “We are in the middle of a pandemic and such high levels of non-compliance [among passengers] have to be a risk and must be extending or prolonging our lockdowns,” she added.

Mr Varadkar said the number travelling in and out of the country is “very, very low” at about 33,000 a week, and people were travelling for essential purposes.

They could not impose a quarantine because it would be disproportionate, he said. “There are a lot of people in Ireland who we know are positive and we don’t detain them.”

Mr Varadkar added that EU freedom of movement rights could only be constrained in very specific circumstances.

And he said a zero-Covid policy, which would target the near-complete elimination of Covid-19 within the State’s borders, and a very strict 14-day quarantine for new arrivals might make sense in a country that can control its borders. “We can’t in the same way because of the open land Border with Northern Ireland which we don’t want to close.”

The Tánaiste told the Kildare North TD that such mandatory quarantining would be unworkable unless the UK moved to such a system.