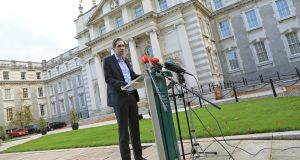 Fears over increased Covid-19 restrictions for other urban and localised areas are growing after the Government imposed Level 3 restrictions on colleges, which will see most tuition move online.

While third-level institutions will remain open during the move lasting up to three weeks, all lectures and most tutorials are expected to migrate online. Students will be encouraged to remain at home rather than travel to their campus. Libraries and laboratories in colleges are expected to remain open, but with social distancing measures in place and regulation on entry. All social activities on campus have been suspended.

Minister for Higher Education Simon Harris said the decision was grounded on the experience in other jurisdictions where there were significant increases in coronavirus cases after colleges reopened.

He also said it was a response to the current situation in Ireland, where the country faced a “critical two weeks” in its efforts to curb the disease.

“Notwithstanding all the protective measures that have been put in place by our higher level institutions, you will appreciate there is now a growing concern about the impact the recommencement on campus of [student] activity will have on the very fragile epidemiological situation that pertains at present.

“We are asking people to show common sense. If you don’t have to trek across the country to attend a lecture, you should not have to,” he said.

Taoiseach Micheál Martin on Friday warned urban centres could have Covid-19 restrictions increased to Level 3, pointing to concerns particularly about Cork, Limerick, Galway and Waterford. He indicated that the National Public Health Emergency Team (NPHET) may advise in terms of particularly localised restrictions.

Acting chief medical officer Ronan Glynn on Friday night said there was “every chance other areas will have to move to level 3”, but said there is “nothing inevitable about it” and people can work together to “turn the tide on his virus”.

Co Donegal moved to Level 3 from midnight, with gardaí to begin a highly visible and targeted operation from Saturday, including cross-border checkpoints in co-operation with the PSNI.

A further 326 cases of Covid-19 were confirmed in the State on Friday night, including 152 in Dublin, 32 in Cork, 21 in Galway and 22 in Donegal .The number of confirmed cases of Covid-19 in hospitals reached 102, going above 100 for the first time since early June.

Meanwhile, it has emerged that contact tracers are to begin investigating where people are infected with Covid-19, following admissions this week by the State’s public health team that it cannot tell where cases are happening in the community.

In a letter to Government, NPHET said that retrospective contact tracing would gather extra information about Covid-19 cases labelled only as “ community transmission” up to now.

A HSE source said tracing teams will now play “detective” and investigate in much greater detail the movements and contacts of a confirmed case to identify at-risk bars, gyms and restaurants.

The HSE has, separately, been asked to explore proposals to significantly increase the level of Covid-19 testing available.

The Minister for Health, Stephen Donnelly, has told senior Government figures he believes that the level of testing needs to be substantially increased ahead of the winter period.

It is understood that the HSE has been asked to produce an options paper on significantly increasing testing capacity.