Coronavirus: Warning over rate of growth as 13 more die in Republic

Another 13 patients diagnosed with coronavirus have died and a further 402 new cases have been confirmed. Video: RTÉ 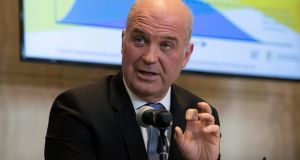 Chief Medical Officer Dr Tony Holohan: ‘We have flattened the curve, but we need to flatten it further.’ Photograph: Colin Keegan/Collins

Intensive care units will be overwhelmed in the coming weeks unless the rate of growth of Covid-19 cases reduces, chief medical officer Dr Tony Holohan has warned.

While there is some optimism in Government that the shutdown of commercial and social life is succeeding in slowing the spread of the virus, Dr Holohan said there needed to be further progress to avoid a situation in which the number of people requiring intensive care outstrips available beds.

“If we keep growing at the rate we are growing we won’t avoid that scenario so we need to keep improving,” he said.

The number of people who have died from Covid-19 in the Republic has now almost breached the 100 mark.

At a briefing on Thursday evening, the National Public Health Emergency Team (NPHET) said 13 new fatalities bring the total to 98.

A further 402 new confirmed cases of Covid-19 in Ireland as of lunchtime on Thursday bring the total figure to 3,849.

Of the most recent deaths, nine were located in the east of the country, one in the south and three in the west. There were nine men and four women with a median age of 82; 10 had underlying conditions.

Globally, total cases of Covid-19 reached over one million, and more than 51,000 people have died so far. The US has the highest number of cases, 236,339, while Italy remains the worst-affected by the outbreak, with 13,915 deaths.

In Ireland, cases of Covid-19 are currently growing at a rate of 10 per cent a day – a sharp reduction from earlier growth rates, which were about 33 per cent. But that growth needs to come down further to enable the health service to deal with the crisis, he said.

“We have flattened the curve,” Dr Holohan, who has returned to work following a brief illness, said. “But we need to flatten it further.”

Later, Taoiseach Leo Varadkar said the rate of increase must be lowered to five per cent or less in order for the health service to adequately cope.

However, senior politicians and officials believe that the lockdown measures announced by the Government at the end of last week are now having an effect in further reducing the spread of the virus. Dr Holohan said, however, that it would be end of next week before it was clear.

Senior officials said that as well as seeking to suppress the growth of the virus, the health service would double the number of ICU beds over the coming weeks, from 312 to more than 600.

Officials will advise Ministers next week on whether the most stringent coronavirus restrictions – initially imposed until Easter Sunday, April 12th – should continue. However, earlier on Thursday Tánaiste Simon Coveney indicated that they may be extended.

Meanwhile, a briefing of party leaders on Thursday was told the restrictions could eventually be eased on a “national, regional or county level”. It is also understood that the meeting heard that a number of Institutes of Technology around the country – such as Limerick, Galway and Sligo – could be used as field hospitals if required.

The Government on Thursday launched a major initiative – the Community Call – which links local and national government with the community and voluntary sectors.