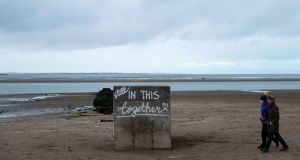 Taoiseach Micheál Martin has said he is really concerned about the new variant of Covid-19 that was first detected in the UK, and about its possible impact on Ireland.

Speaking before a special Cabinet meeting on Monday, Mr Martin said that rapidly rising numbers of Covid-19 cases in the run-up to Christmas were also of concern.

“I am very concerned about this new mutant variant, which has a 70 per cent additional transmissibility which is far in excess of anything we have experienced to date,” he said.

The Taoiseach said the Government would be keeping the situation under review.

He also defended the new measures which the Government has introduced in the face of rising coronavirus incidence levels.

“We have introduced very severe Level 5 measures. We will be keeping this under constant review. Cabinet will be considering all of this in the coming period.

“The only areas not covered [by the restrictions] are non-essential retail, the impact of which has been shown to be not huge, and the 5km restriction [on movement was not reintroduced].”

He said a lot depended on behaviour, individual and collective.

“That is the key,” he said, adding that reducing social contacts, wearing face masks, and observing other public health protocols was the best way of keeping coronavirus numbers down.

On the subject of the Covid-19 vaccination programme, he said it would commence on Tuesday and would be “ramped up significantly” in the new year, initially targeting healthcare settings and also residents of nursing homes. The rollout plan was to be discussed extensively at the Cabinet meeting.

Earlier Tánaiste Leo Varadkar had indicated that he does not envisage the lifting of Level 5 Covid-19 restrictions any time soon.

He said there was a case for saying that Level 5 restrictions should stay in place until those most at risk were vaccinated.The current levels of restrictions would be reviewed by the Cabinet on January 12th, he said.

Mr Varadkar said it was expected that cases would rise early in the new year and then “hopefully” fall off. However, he warned that some form of Level 5 restrictions could have to remain for months, not just weeks. Any plan would have to take into consideration all the consequences.

Mr Varadkar said there was a concern that the new, more transmissable variant of the virus in circulation here might have to change the National Public Health Emergency Team’s calculations. Previously when there were Level 3 and Level 5 restrictions the R rate of Covid-19 had been reduced, but the new variant could have an impact on that, he said.

Mr Varadkar also defended the rate at which the Covid-19 vaccination programme will commence in the State after several EU countries began the rollout of their programmes over the weekend.

He told RTÉ Radio’s Morning Ireland that the pace at which the vaccination programme will be rolled out is because of issues such as training for vaccinators and informed consent.

Medical experts had advised that the programme should commence in acute hospitals so there would be full back-up if anything were to happen. There had been some cases of anaphylactic reaction to the vaccination in other countries, he said.

When asked if the issue of litigation had been a concern, Mr Varadkar said that was always the case in Ireland with “anything to do with any kind of medical care”. There had been “heightened concern” about litigation and the necessity “to make sure everything is right”.