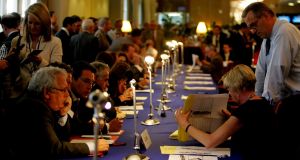 The 2011 Seanad election count at Leinster House. This year candidates are being urged to stay away. File image: Cyril Byrne / The Irish Times

Fianna Fáil candidates contesting the first Seanad election panel to be counted have agreed to stay away from the count centre as part of efforts to prevent the spread of Covid-19.

The eight party candidates for the Cultural and Educational panel have decided instead to have a maximum of two agents represent them .

This follows an appeal by Cathaoirleach of the Seanad Denis O’Donovan to all election candidates and their supporters not to attend the count at the Printworks Centre in Dublin Castle, when it gets underway today.

Twenty candidates are competing for five seats on the first of five panels to be decided.

Fianna Fáil candidate Malcolm Byrne, a former TD, said all of the party’s eight candidates on the panel have agreed to have “one or possibly two agents to act on our behalf at the count”.

Urging contestants to stay home Mr O’Donovan said that for candidates and their agents to attend the count “goes against the spirit of what the Government is trying to do to stop the spread of the virus”.

Mr Byrne, from Gorey, Co Wexford, said however “it is important that there is an agent if an issue of dispute arises but there is no need to have lots of people there”.

It is now thought likely other parties and Independent groupings will take similar action.

By law every candidate and their agent is entitled to attend proceedings but there are 118 candidates on the vocational panels and Mr O’Donovan said that along with count staff and volunteers and security personnel, if every agent and candidate attended, over the course of the five-day count “you’d have somewhere around 500 people milling in and out of the hall”.

He said: “I know it’s a great scene at times. It’s like being at a mart selling an animal.” Everyone wanted to watch their vote coming out but, he added, it was also a very long day during which not a lot happened and their presence “won’t make an iota of difference”.

“Constitutionally the count has to take place and the 49 Senators need to be elected,” on the vocational and university panels.

The National University of Ireland count starts at 12 noon in the RDS on Tuesday and the Trinity count on the same day in the Trinity College exam hall, and are also expected to limit entrance.

The remaining 11 Senators who make up the 60 members of the Seanad can only be appointed by the incoming taoiseach of a new government. Outgoing Taoiseach Leo Varadkar is not empowered to nominate them.

He had received positive feedback from a number of candidates that they would not travel and appealed to all others to stay home.

A statement earlier in the week by the Houses of the Oireachtas said access the to the Printworks in the Dublin Castle where the count is being held would be restricted to candidates and their agents, the “minimum attendance allowed by law”. But they were requested to have only one attend in the interests of public health.