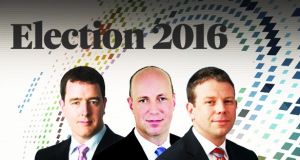 Cork South West’s first female TD says she plans to celebrate before taking stock. Margaret Murphy O’Mahony topped the poll and said she is “thrilled and delighted with her achievement”.

The only Fianna Fáil TD running in the predominantly rural constituency, Ms Murphy is a mother of two from a strongly political Bandon based family. She led the poll throughout and finished with 11,962 votes on the fifth and final count, some 1,147 over quota.

“I am absolutely thrilled to make history for all the right reasons. I hope it shows other ladies you can have it all and it can be done,” she said. She plans to work on ‘the recovery for west Cork and flood issues’ in the Dáil.

Fine Gael TD Jim Daly from Drinagh held onto his seat without reaching the quota but lost his Beara based running mate Noel Harrington.

“Nobody saw this coming. We will have only one seat after the election and that’s very difficult to deal with,” he said.

“On a personal level we are all human and I’m delighted for Margaret Murphy O’Mahony and welcome female representation here for the first time in the history of the State. It’s going to be very different from the last time.

“The first time I was part of three government TD’s. This time it will depend on the make-up of government and who has access to government. It will be a different dynamic and new ways of doing business will be found,” Mr Daly said.

Michael Collins from Schull is the first Independent to be elected in Cork South West since 1957, when Florence Wycherley, father of actor Don Wycherley won a seat. Known across the constituency as a community man, he is a father of three teenage children and a dry stock cattle farmer.

Mr Collins is a local politics man and has been active across a range of community platforms for the past 25 years. He came in second with 11,063 votes on the fifth count.

He first ran in the local elections in 2014 he says, out of ‘sheer frustration’ at the lack of political will to address local issues in his region and he topped the poll. His top three issues for west Cork will be roads, broadband and a reversal of cuts to the Leader funding support programme for rural enterprise.