Former minister of state would run in Dublin constituency, where party is without a seat 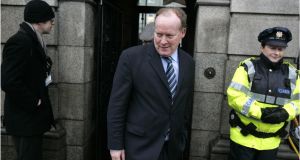 Former Fianna Fáil minister of state Conor Lenihan has confirmed he is talking to the party about running in the Dublin constituency in the next European elections. Photograph: Dara Mac Dónaill/ The Irish Times.

Former Fianna Fáil minister of state Conor Lenihan has said he is talking to the party about running in the Dublin constituency in the next European elections.

“I have been approached by some people within the party about running and I am actively looking at that,’’ he said.

“Europe is hugely important now and there is a big job of work to be done in terms of promoting Ireland in the aftermath of Brexit.’’

The elections do not take place until 2019 but given the party has no sitting MEP in the capital, Fianna Fáil is taking a long-term view of the contest.

Mr Lenihan’s strength would be his political experience and name recognition, given his family’s long involvement with Fianna Fáil.

The party’s chances of taking a seat improved when Independent MEP Nessa Childers, daughter of former Fianna Fáil president and minister Erskine Childers announced she would not seek re-election.

The other two seats are held by Fine Gael’s Brian Hayes and Sinn Féin’s Lynn Boylan and are considered safe.

Fianna Fáil now has six Dáil seats in Dublin following an increase of five in the last election. In 2011, the only Dublin seat for the party was won by Mr Lenihan’s late brother, Brian jnr, then the outgoing minister for finance.

Running a sitting TD would mean a byelection if they won, a prospect never welcomed by any party, which makes the prospect of an outside candidate more appealing to the party.

Conor Lenihan served in the Dáil for the Dublin South West constituency from 1997 to 2011 and was appointed to a number of minister of state positions.

In 2011, he accepted a position with the Skolkovo Foundation, and planned high-tech innovation centre in Moscow, and now works between Ireland and the UK as an adviser in investment areas in technology and natural resources.

His late father Brian snr also served as a minister as did his aunt, Mary O’Rourke. His grandfather Patrick Lenihan, a close associate of party founder and later taoiseach Seán Lemass, also served in the Dáil.

In the last European elections, Fianna Fáil Dublin councillor Mary Fitzpatrickran for the party, finishing fourth in first preferences with 12.6 per cent of the vote.