Coalition with Fine Gael would be ‘end of Fianna Fáil’ 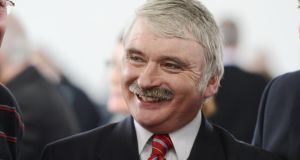 Entering government with Fine Gael, as the junior coalition partner, would “be the end of Fianna Fáil as we know it”, former minister Willie O’Dea has said.

The Limerick TD said he would refuse to support such a coalition, claiming Fine Gael is responsible for right-wing policies that hurt vulnerable people.

“Am I going to tell the people I meet who say they want to get rid of Enda Kenny that I will actually put him back in?” he asked.

Mr O’Dea did say that the prospect of Fianna Fáil voting in the Dáil with a Fine Gael-led minority government on a case-by-case basis was a possibility. This would only apply if Fianna Fáil supported the policies in question.

A number of other party TDs have said this is a more likely option than entering a coalition with Fine Gael, if the current senior Government party fails to form a coalition with a working Dáil majority.

Mr O’Dea and other TDs were reacting to comments from Fianna Fáil finance spokesman Michael McGrath, who said the party should not rule out going into coalition as minority partners, thus raising the possibility of an alliance with Fine Gael.

The Cork South-Central TD said it would be “out of touch and arrogant” for Fianna Fáil to insist on being the majority party. He also said the party must be relevant when voters were choosing a government.

Party leader Micheál Martin has ruled out coalition with Fine Gael, which he described as too right-wing. Mr Martin’s spokesman declined to comment on Mr McGrath’s statement.

Fianna Fáil Offaly TD Barry Cowen said: “My preference, and a position I would be supporting, is that we go into government in a majority position.” His view was supported by Fianna Fáil Limerick TD Niall Collins.

Minister for Transport Paschal Donohoe called on Mr Martin to explain what voters could expect if they voted for the Opposition party.

“I think it’s now very important that Micheál Martin come out, that he make very clear to the Irish people that if they do vote for Fianna Fáil in the next Dáil, what would they be getting alongside that,” Mr Donohoe said.

“Prominent backbenchers in his own party are now disagreeing with him on both counts, and I think as leader of that party he has a duty now to come out and spell out very clearly to the Irish people that, if they do vote for Fianna Fáil, what else are they going to get in return for that vote?”

Mr Donohoe said voters should be asked to transfer between Fine Gael and Labour to re-elect the current Coalition, but that a joint general election manifesto was neither “feasible or appropriate”.

1 Coronavirus: HSE experts support the early reopening of schools
2 Quarantine may be lifted for arrivals into Ireland from countries with low Covid-19 cases
3 Irish planning for no-deal Brexit to restart as EU-UK talks go badly
4 Trump announces clampdown on social media companies
5 All students will not return to school even if social distancing relaxed – McHugh
Real news has value SUBSCRIBE