Analysis: Noticeable that the party did not charge into Leaders’ Questions with usual budgetary critique 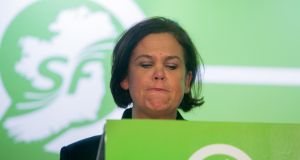 For every budget delivered in the last three years, there was one certainty about what would unfold the following day in the Dáil.

As the dust settled and Ministers breathed a sigh of relief at making it through the process without any political landmines exploding, the leader of Sinn Féin would rise to his or her feet for Leaders’ Questions the next day and lambast the perceived failures of the budget.

Last year, Mary Lou McDonald raised the planned increase in the carbon tax with the taoiseach. “The morning after the day before, I ask him to do the right thing and to drop this carbon tax increase,” she said.

In 2018, McDonald described what had been announced the previous day as a “budget for landlords” as she accused the government of leaving renters “out in the cold”.

In 2017, Gerry Adams said the government had just failed in a “spectacular way” to tackle the crisis in the health service.

In the hangover of the Coalition’s colossal budget blowout this time around, the fact that Sinn Féin chose not to charge into Leaders’ Questions with its usual budgetary critique did not go unnoticed.

Politicians from Fianna Fáil and Fine Gael privately mused that even Pearse Doherty, who in almost a decade of budget speeches has never failed to find faults that enraged him, seemed a bit “at sea” in responding.

Last Friday Doherty announced his party’s alternative budget and, in support of the position that “now is not time for fiscal conservatism”, he outlined how Sinn Féin would spend an extra €18 billion next year. The Government’s final budget package comes in at just under €18 billion.

In the cavernous surroundings of the Convention Centre, Doherty said it had failed to give certainty, failed to end two-tier pay in the public sector, and that it was “more of the same”.

As one senior figure Fine Gael figure said afterwards: “they did not land a blow. It was more of the usual from Pearse – we would spend more and borrow more than you. It was pretty bankrupt”.

A senior Fianna Fáil figure added: “Pearse Doherty can only do the Mr Angry from Donegal routine so often.”

One Minister, remembering a pre-budget conversation with their Sinn Féin counterpart on the same brief, told of the TD’s shocked approval when some of the budgetary measures were explained.

Yet, for all of the Government satisfaction at the more muted Opposition response, Sinn Féin are undoubtedly making inroads with voters.

Housing was a key issue in February’s general election and Sinn Féin thrived on Eoin Ó Broin’s detailed analysis of the crisis. Speaking outside the Dáil on Wednesday, he didn’t hold back.

“It is clear from yesterday’s announcement that Fianna Fáil and Fine Gael do not care about struggling renters in our urban centres. They could have introduced a ban on rent increases. The message from Darragh O’Brien is: you are on your own,” Ó Broin said.

Childcare is also a key focus for Sinn Féin, and the party’s spokeswoman on the issue, Kathleen Funchion, declared on Wednesday that the Government “didn’t even try to pretend that they are doing anything for the early years sector. And there is huge anger out there today with those working in the sector and parents who were hoping for a break”.

In the coming days, Sinn Féin will launch the results of a public survey in which 70 per cent of women say they are being pushed out the workforce because of childcare.

Sinn Féin also continues to focus minds on the Pandemic Unemployment Payment (PUP), criticism of which stings in Government circles.

McDonald said the failure to restore the PUP to previous levels “exposes those who have lost their incomes through no fault of their own to a greater risk of poverty”.

The issue has caused some unease in Fianna Fáil, with one senior figure saying: “If we move to Level 4 and a whole range of jobs are lost I think we should look at restoring the full PUP.”

It is clear that any softening in Sinn Féin’s rhetoric over what was a once in a lifetime budget will be very short-lived.