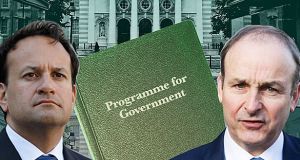 Fianna Fáil leader Micheál Martin and Fine Gael leader Leo Varadkar are both seeking to sell the coalition deal between their two parties and the Greens as the three party organisations decide whether or not to back the agreement.

The Taoiseach and Mr Martin also warned of the consequences of the draft programme for government being rejected by either of the three parties.

The results of internal ballots on the deal will be announced on Friday with Mr Martin expected to be elected Taoiseach by the Dáil on Saturday if all the parties give their assent to the coalition agreement.

Mr Martin told RTÉs Radio One’s Morning Ireland there is no “Plan B” for government formation, saying the proposed coalition represented an historic combination that would be “truly transformative”.

A government needed to be formed to respond to issues arising from the Covid-19 pandemic, he said. “We have to deal with the result of the election. We have a mandate to work with others to deliver a programme for government that is sustainable.

“This has taken a long time, it involves a lot of detail and compromise on all sides.”

The Fianna Fáil leader added that he was uncertain what would happen if the deal was not passed, but he had received very positive feedback within his own party.

There was no pathway if it did not get through, he said, but it was unhelpful to discuss “speculative scenarios”. He was pressed on whether there would be a second election and if his party would talk to Sinn Féin about government formation if the deal was rejected.

He was also asked if he would support the election of Mr Varadkar as a short-term taoiseach in the Dáil to pass certain pieces of legislation that may need to be renewed.

The Government believes that the Offences Against the State Act can only be renewed if a new taoiseach appoints 11 senators to the Upper House, and says it cannot be done by an interim taoiseach.

“I would say to the membership of all three parties: to avoid such a crisis is in our hands and that is to vote for the programme for government that is before us.”

Mr Martin declined to say if the position of Minister for Children would be retained, saying that was a matter for the three leaders to discuss as they were still working on the configuration of government departments.

“I am not going to unilaterally declare something here, but children will be centre stage any government formation.”

When asked if he intended to lead Fianna Fáil into the next general election, Mr Martin said he did, but that the public did not want another general election during a pandemic. “People would be annoyed.”

His intervention came as the internal debate in the Green Party over coalition reached its final stages. It is said to be delicately poised between the Yes and No camps. Many party members have already posted their votes on the issue, ahead of the count on Friday. Leading figures on both sides were involved in intensive campaigns over the weekend, making thousands of telephone calls.

Meanwhile, in comments broadcast on Newstalk Breakfast on Tuesday morning, but initially recorded for local radio on Monday, Mr Varadkar said rejection of the deal could lead to a political crisis.

Mr Varadkar said rejecting the proposed coalition deal involving Fine Gael, Fianna Fáil and the Green Party could lead to a political crisis. It offered an opportunity for stable government that could last until 2025, he said.

Some members of his party had advised him to have a “Plan B”, he said, but he had decided not to do that because Fine Gael had entered the coalition talks with Fianna Fáil and the Green Party in good faith.

“The three parties together won 51 per cent of the vote in the election,” he said. “I know there is a party out there that thinks 24.5 per cent is a majority - it’s not, 50 plus one is a majority and that is what we have.”

If the plan for government was rejected then his party would have to sit down and see what options were available to it.

Mr Varadkar said his party would have been happy to return to opposition after the election, but claimed it had been forced to “step up” when Sinn Féin failed to form a government.

“Sinn Féin, despite their protestations, never really tried. They didn’t even come up with a framework document with the far-left. They voted for Mary-Lou [McDonald] initially, but they couldn’t even agree a common policy among themselves.

“So, given that the opposition on the left were so incapable of delivering on any of the promises they made, we felt we should step back in and this was our best attempt and perhaps only attempt to form a government.”

Mr Varadkar warned that if his party voted against the coalition deal there was a danger that this could push Fianna Fáil and Sinn Féin together “and we could have them in government within weeks.

“That is a real risk and we have to be wise to that.”

While he did not think Sinn Féin would win a majority in an election,the party could strengthen its position and become the largest party. There were some members in his party who thought that would be a good thing, he claimed.

“I know there may be some people who think it would be a great thing for Sinn Féin to get into government, wreck the country and in five years’ time, the people will be sorry and vote for Fine Gael again.”

Later, Ms McDonald said Fianna Fáil and Fine Gael were continuing to “stick their chests out” and say they would not speak to her party.

In the meantime, the Sinn Féin leader told the Today with Sarah McInerney programme on RTÉ she is happy to talk to the Greens, Social Democrats, People Before Profit and Independents to establish if they could agree to form “the spine of a government”.

Ms McDonald said: “I will talk to everybody, I won’t agree with everybody.”

Asked if she would be taoiseach in such an arrangement, Ms McDonald said yes but stressed it was not about a job for her.

She said there would be a Minister for Children if Sinn Féin was in government.