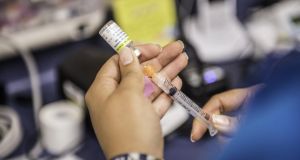 Gardasil: Clare Daly TD has called for an independent review of the HPV vaccine. Photograph: Matthew Busch/Washington Post via Getty

The Dublin Fingal TD Clare Daly has said she makes no apologies for asking parliamentary questions about the HPV vaccine, which is used to prevent cervical cancer.

The Independents 4 Change TD has met a number of parents and young women who believe severe health problems followed the administration of the vaccine, her spokeswoman said.

“They are not hysterical anti-vaccine conspiracy theorists. They are parents who allowed their daughters be vaccinated, as Clare did. They are entitled to answers and support, and Clare will be continuing to push for full disclosure and support when the Dáil resumes.”

Ms Daly is one of the TDs in the current Dáil who have raised the most queries about the vaccine, having made a total of 13 interventions.

“She makes no apologies for asking questions about the HPV vaccine or any other. She supports vaccination as an important contribution to the protection of public health. However, citizens are entitled to meaningful, informed consent,” her spokeswoman said. “She is struck by the frenzy that is whipped up against anyone who seeks information or asks questions.”

Ms Daly’s spokeswoman said all vaccination programmes should explain “the risks as well as the benefits” and include support for “the minority who will have adverse impacts”.

She said the best way to ensure vaccination programmes were supported was to provide full information.

In another parliamentary question she referred to “many autoimmune reactions being experienced by HPV-vaccinated girls”, and in a further question she referred to data she said was submitted to the European Medicines Agency that “indicated that those pre-exposed to vaccine-relevant HPV may experience a 44.6 per cent increased risk of precancerous lesions after vaccination”.

She has also called for an independent review of the Gardasil human papilloma virus vaccine.

Mr Harris said the World Health Organisation’s global advisory committee on vaccine safety had concluded that there was no evidence of a health risk from aluminium-containing vaccines. There was no data to suggest Gardasil crossed the blood-brain barrier, he said.

Minister of State for responsibility for disability issues Finian McGrath has meanwhile performed a U-turn over his opposition to the vaccine.

Earlier this week he said he supported a Government campaign to encourage take-up of the vaccine, having previously raised concerns. The campaign aims to reverse the dramatic fall last year in the number of girls having the vaccine in secondary schools.

Last month the Irish Cancer Society warned that at least 40 women would die because of the drop in the vaccination rate.