Ministers failing to appear to respond to questions by backbenchers 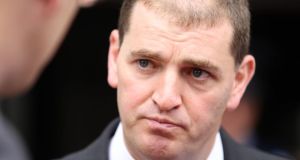 The Government has admitted its performance on a key Dáil reform measure has been “deplorable”.

It has also conceded that a promise not to rush through legislation without proper discussion has not been kept.

With the debate on the abolition of the Seanad under way, there has been increased focus on the question of Dáil reform and the success or otherwise of the major changes introduced by the Coalition.

Analysis by The Irish Times has shown senior Ministers have failed to appear in the Dáil three times out of four on average to respond to the four “topical issues” raised by backbench TDs from all parties on each Dáil sitting day. It also showed that some 40 per cent of issues were dealt with by a Minister of State from a non-relevant department who read from a script.

As a central plank of its reform programme, the Coalition promised senior Ministers would make themselves available in so far as possible.

“I would be first to say that it’s deplorable that some Ministers are calling for Dáil reform and at the same time do not co-operate with reform. I’m not naming or blaming individual Ministers,” he said.

Separate research has shown more than half of the debates on Bills introduced to the Dáil since the Coalition came into office in March 2011 have been rushed through, or “guillotined”, notwithstanding the promise of the Government the practice would occur only in the most exceptional circumstance.

Guillotined Bills
Up to mid-March 2013, 52 out of 90 Bills were guillotined or 57 per cent of all Bills passed. Many of the guillotines have been applied in the run-up to the Dáil going into the winter and summer recesses. The most contentious was the Gaeltacht Bill last summer, the guillotining of which led to a mass walkout from the Dáil chamber by the Opposition.

Adjournment debates
One of the key changes was to abolish the late-night adjournment debates (on issues of the day) where Ministers rarely appeared and replace them with a topical issues debate at which Ministers would be compelled to appear.

Some 360 issues have been raised in the 90 sitting days since last September and senior Ministers have appeared to answer questions on 97 occasions, or a quarter of all issues. Junior Ministers from the relevant department have answered questions on a further 25 per cent of issues. However, almost half of the replies have been read from a script by ministers with no knowledge of the issue.

Earlier this week, Taoiseach Enda Kenny said that more deep-seated Dáil reform would take place in response to the abolition of the Seanad. He said that the Dáil would sit weekly for four days (as opposed to three) and that the Dáil committee system would be s strengthened.