Changing of the guard unfolds at Sinn Féin conference 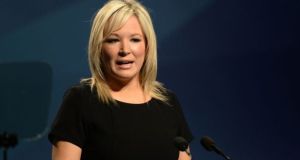 It was ostensibly a conference on finding a pathway to a united Ireland. But in reality it was one of those moments for Sinn Féin. We were witnessing the changing of the guard unfolding in the Mansion House on Saturday.

The past is Martin McGuinness. His departure from frontline politics is a wrench to the party that, for the present, is incalculable. How long since McGuinness was last absent from one of these occasions? And the topic of his illness and resignation was a dominant topic of conversations.

Gerry Adams was conscious of this. He read out a text from McGuinness as he opened the conference: “Sorry to miss the united Ireland conference. I will be there in spirit. I have struggled all my life for a united Ireland and I don’t intend to stop anytime soon.

“British rule in Ireland fails everyone in Ireland including our unionists brothers and sisters. Onwards to the Republic.”

And the future? The Tyrone MLA, Michelle O’Neill, who is expected to take the reins from McGuinness, gave the closing speech of the conference. Everyone in the room was conscious of her new dauphine status and the rapturous reception reflected that. She gave a speech that did not deviate from the script.

There was little to learn about her, and whether she will have the grist for the task in hand. Still, if the sources are correct, it will be O’Neill, and whoever eventually replaces Adams in the South, who will lead the party into the next phase of its development.

That said, she is not really proven in the heat of the really big challenges that will face the party, North and South (though I’m sure Sinn Féin has put a lot of thought and effort into the succession strategy). It now seems that it has decided for a female leadership of the party on both sides of the island.

It was interesting that Adams in his speech put huge emphasis on gender equality as a necessary precondition for a united Ireland.

The seminar itself heard a variety of views, from different backgrounds, including unionism.

The debate on Irish unity needed to be “deShinnerised”, the writer and commentator, Kevin Meagher, told the conference. He said others besides Sinn Féin needed to begin to develop positions and end their voices, otherwise the debate would remain marginalised.

“The debate needs to be deShinnerised. The whole of Irish politics needs to buy into this debate,” said Meagher, a former special adviser to a Labour Northern secretary Shaun Woodward.

In his address, Adams said that he believed this generation could “conclude the unfinished business of 1916” but that it would need “political will and thoughtful strategies”.

He outlined how partition had set up two administrations, duplication of services, two sets of currencies, tax systems and laws.

The unionist commentator, Alex Kane, told the conference a Border poll would be very divisive as 90 per cent of unionists would “under no circumstances be persuadable to a united Ireland.

“They don’t care, they do not want a united Ireland [under any circumstances],” he said.

He said that only 15 to 20 per cent of unionists would be persuadable.

McDonald said the debate about a united Ireland was “not about grafting the six northern countries on to the South.

“What we are talking here is about building an entirely new entity,” she said. “What we are looking for is a democracy not a theocracy.”