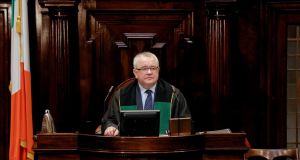 Ceann Comhairle Seán Ó’Fearghaíl said he was not ‘prepared to be bullied’, before suspending the Dáil. Photograph: Maxwell

The Dáil was suspended amid rowdy scenes during a procedural argument on Tuesday afternoon.

There was uproar after Ceann Comhairle Seán Ó Fearghaíl blocked a Private Members’ motion from the Solidarity-People Before Profit grouping seeking to prevent the Government blocking opposition Bills by using a procedural device called a “money message”.

Mr Ó Fearghaíl refused to allow the motion, citing concerns about its constitutionality.

People Before Profit TD Richard Boyd Barrett claimed the Government is abusing the money message, calling it a “sabotage of the democratic process”.

Under Dáil rules, an Opposition Bill cannot proceed through the legislative process unless the Government supplies a “money message” on the possible cost to the State of implementing the legislation.

But the Fine Gael-led Government has used the financial device, previously a formality, to block Opposition Bills, even though they have passed their first vote in the Dáil.

During heated exchanges, the Ceann Comhairle said “I’m not prepared to be bullied”, after People Before Profit TD Bríd Smith said she was going to “stand here until I’m allowed to discuss our motion”.

She said the party had put in their motion 10 days ago but only got a response at 9pm on Monday.

“This is at the very least shoddy; and at the worst totally undemocratic.”

Mr Ó Fearghaíl said the motion was not in order because it would mean certain Bills would be allowed to progress “in an unconstitutional manner”.

He was “satisfied that the advice I have been given is valid” although he acknowledged that it would cause the group great difficulties.

Mr Boyd Barrett accused the Ceann Comhairle of “absolutely sabotaging the right of TDs in this House to put forward a motion”.

Fianna Fáil leader Micheál Martin said the Government was not treating the House with respect as it “consistently abuses the money message”.

Labour leader Brendan Howlin said TDs are struggling to get around the “impasse” and “blockage” that they all know exists.

Independent TD Thomas Pringle said there was a tendency on the part of the Ceann Comhairle’s office to act as a gatekeeper. And he suggested it might be best to take the matter to the courts.

Government Chief Whip Seán Kyne denied Opposition claims that 54 Bills had been blocked. He said of the Opposition legislation before the House, the Government had yet to receive a money message on 10. He added that 13 Private Members’ Bills had been passed since 2016.

Earlier, the Solidarity-People Before Profit group said that they might seek a High Court injunction on Tuesday compelling reinstatement of their motion to Wednesday’s Dáil order paper.