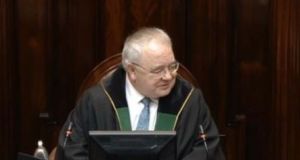 Ceann Comhairle Sean Ó Fearghaíl spoke as the Dáil resumed at 8pm, after it adjourned some hours earlier in the afternoon. File photograph: Oireachtas TV

Ceann Comhairle Sean Ó Fearghaíl has defended his action in adjourning the Dáil “in the emergency situation that was described to me” when he was informed that Cabinet members were going to restrict their movements.

Mr Ó Fearghaíl was speaking as the Dáil resumed at 8pm, after it adjourned some hours earlier in the afternoon.

Opposition TDs described what had happened as a “shambles” and “outrageous”, and they sharply criticised the failure by Government to inform party whips about what was going on.

Mr Ó Fearghaíl said: “I’ve no difficulty with how I acted. I don’t think anyone else would have acted any differently. How we came to be asked to take that action at that particular time is another story.”

Speaking as the House recommenced business on Tuesday night, he said that “lest anyone think I had a sudden rush of blood to the head” the chair is the sole judge of order.

He he had received an “extremely urgent communication” from Government and in accordance with that communication ruled that the House would adjourn forthwith.

Labour leader Alan Kelly said it was as very strange ruling to adjourn the Dáil earlier.

He said he rang Taoiseach Micheál Martin and said that he did not understand the legal basis for adjourning when there were 19 Ministers of State who could have taken business. He said Mr Martin rang him back and said he agreed that the Dáil should resume.

Mr Kelly said he was not sure if the Dáil would have resumed had he had not spoken to Mr Martin. He said the Ceann Comhairle’s announcement “took everyone by surprise” and that instead of simply adjourning he should have explained what happened and the chain of events.

Sinn Féin whip Pádraig Mac Lochlainn described the situation as an “incredible shambles”. He said he was whip for 37 TDs and nobody “from this institution” had told him what was happening, and he had had to rely on political correspondents on Twitter who were clearly being briefed. But “not one whip” from any party had received any message about what had happened and that was “absolutely outrageous”.

Independent TD Michael Healy-Rae said it was “outrageous” to suggest that the Ceann Comhairle was doing anything other than acting in good faith.

Instead of having a postmortem on what happened over the last couple of hours they should decide what they were going to do over the next few days, he said.

Independent TD Michael McNamara said the role of the Taoiseach is not to tell the Dáil what to do, but it was the Dáil’s role to hold the Taoiseach to account.

Deputies needed to ensure such a situation did not happen again.

“As a legislature we are elected to show leadership and that is sorely missing in this State at this moment.”

Mr Ó Fearghaíl said that “I have absolutely no difficulty with any questions from the Opposition”, adding that they were absolutely legitimate and in order.

He said it had been indicated to him before parliamentary questions on health that “there might be a problem with the Minister for Health’s availability”.

A very senior member of the team approached him while they were waiting who “had received a message from Government to the effect that there was - I’m not sure what terminology we should use whether it’s self-isolation or whatever - that there were problems with the availability of Ministers to transact business here.

“And the advice we were receiving from Government was that the House should adjourn and that it would be recalled in due course by the Taoiseach.”

UCC to hold virtual freshers’ week despite calls to cancel over Covid-19 fears 20:40
Assembly members call for equivalent of Helen’s Law in Northern Ireland 20:24
TDs and councillors say use of local restrictions should be considered 20:08
Nurse who falsified prescriptions is struck off register by High Court 20:00
City council to investigate Central Bank’s bird scaring device 19:59