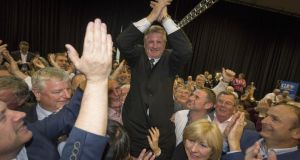 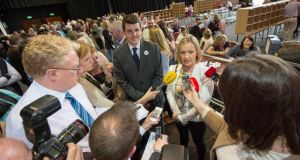 Fianna Fáil’s Bobby Aylward has won the Carlow-Kilkenny by-election comfortably after topping the poll with some 28 per cent of the total vote.

His victory was seen as a major fillip for Fianna Fáil and for its leader Micheál Martin, following unsuccessful attempts in six by-elections held since 2011.

The party will hope it will give new momentum to the it’s recovery following indifferent showings in opinion polls over the past year.

Mr Aylward was declared the winner at the conclusion of the ninth count at 2.10am on Sunday. He had almost 5,000 votes to spare over his closest rival Fine Gael’s David Fitzgerald.

He was elected without reaching the quota following the elimination of Sinn Féin’s Kathleen Funchion in third place.

The 60-year old farmer from Mullinavat was always the favourite to reclaim the Dáil seat he lost in 2011. His farming background was seen as a big advantage in this largely rural constituency.

Martin said his party’s victory has illustrated its capacity to command a significant proportion of the vote in any electoral contest.

“I think it renders us very competitive in terms of every single constituency in the next general election,’’ he added.

He said the party still had a journey to travel, adding that while it was an important byelection win, Fianna Fáil was still on a journey of renewal and recovery.

“This is part of that,’’ he added. “We have another big challenge ahead in the general election.’’

He was then almost 5,000 votes ahead of his nearest rival, Fine Gael’s David Fitzgerald, with 13,744 votes. The Sinn Féin candidate Kathleen Funchion was in third place with 10,806 votes (16.2 per cent). She was eliminated after the eighth count.

Her performance will put her within biddable distance of winning a seat in this five-seat constituency in the general election.

An illustration of an emerging split in Irish politics between so-called ‘establishment’ parties and smaller anti-austerity parties was the fact that a majority of Ms Funchion’s votes after the eighth count - almost 10,000 out of 16,500 - were non-transferable.

The other big talking point was the performance of Patrick McKee. The former Fianna Fáil councillor was the standard bearer for the new Renua party, led by Lucinda Creighton, in its first electoral contest.

Mr McKee put in a solid performance but party strategists were hoping he might do better than his 6,365 votes (or 9.5 per cent) after the first count.

However, party leader Lucinda Creighton, who was present at the count centre, said it represented a very strong performance for the party in its first electoral outing.

Labour Party candidate William Quinn, one of few Carlow-based candidates, had 4,673 first preferences, comprising 7 per cent of the vote. That compared with the party’s 16 per cent in the general election where Ann Phelan was the poll topper.

Fianna Fáil had been quietly confident of taking the seat since the first tally boxes from Carlow were opened in the morning. Mr Aylward himself said he was “cautiously optimistic”.

One noteworthy aspect of the election was the very high number of spoiled votes, some 2,066 in all. It is thought that these came mainly from younger voters who voted in the same-sex referendum but were not willing to cast a vote in the election.