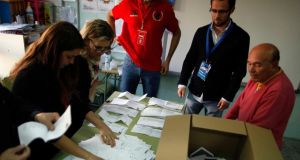 All eight seats in the Bagenalstown area were filled early yesterday morning when the count finished shortly after 4am. File photograph: Reuters

Jim Deane, a first time candidate in the Carlow local elections, has secured an historic third seat for Sinn Féin.

Deane was elected on the twelfth count in the Carlow area yesterday afternoon and will join his party colleagues, John Cassin and Andy Gladney, when the newly formed county council meets next month.

All eight seats in the Bagenalstown area were filled early yesterday morning when the count finished shortly after 4am.

The national trend was bucked there when Fine Gael managed to secure half of the eight places available, but the poll was topped by Independent candidate Charlie Murphy.

Gladney, a first time candidate, took the fourth seat in the Bagenalstown area for Sinn Féin, on the ninth count. This was the second victory for the party after Cassin’s was elected on the first count in the Carlow electoral area.

Fianna Fáil’s Arthur McDonald took a seat on the 10th count in the Mhuinebheag are. It was the fifth seat out of eight.

Michael Doran (FG), John Murphy (FG) and Denis Foley (FG) were all elected on count 12 of the Mhuinebheag area.