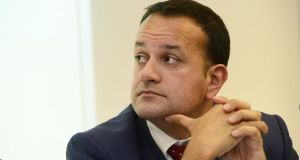 The Taoiseach has dealt with Dáil questions “as a doctor and as a brother”. Photograph: Cyril Byrne

“I learned this week that I’m dying and that the cancer is discovered in my bones and everything, so I have a test on Friday to see exactly how long I’ve left.”

Like much of the rest of the country, Ministers stopped what they were doing to listen to the extraordinary interview on Morning Ireland with Emma Mhic Mhathúna.

Speaking at Leaders’ Questions, Minister for Finance Paschal Donohoe said the “world began to slow down and then stop’’ when he heard the interview yesterday morning.

“It makes us reflect on the obligations we have as members of Government and of this Dáil,’’ he added.

But Mhic Mathúna had clear ideas about ministers’ performance. “The Government need to go . . . they’re not actually capable of minding us, and that is their job. To make sure that we’re okay.”

No screening programme is 100 per cent accurate; there will always be women whose cancers are not caught; who are just desperately unlucky. Unlucky twice over, in this dreadful lottery – unlucky to get cancer, and unlucky to have their test return an incorrect result.

Ministers have sought to explain the realities of screening programmes, the inevitabilities of “false negatives”, the need for understanding the differences between screening indications and actual diagnoses. But yesterday they were brought face to face with the human reality of what the inevitable mistakes mean. After Vicky Phelan’s measured and resigned anger came the raw reality of Mhic Mathúna. There will doubtless be more.

“The 2013 smear said that I was healthy when I wasn’t. And because of that then I actually developed cancer. And now I’m dying,” she said.

“And what just makes this whole situation so sick is that the Government aren’t doing anything about it,” she said.

The Taoiseach has dealt with Dáil questions “as a doctor and as a brother”, seeking to keep the focus on the women affected and the need to protect the credibility of the screening process; but his best friends wouldn’t say he suffers from an excess of empathy.

His Minister for Health has shown better form in this regard, but the scandal is chipping away at him.

The fact is that stories of the women let down so abjectly by the smear-test failures are so desperately sad and affecting, that anything the Government can do in the way of dry policymaking, setting up inquiries, compensation and so on can never be a sufficient answer.

Before yesterday morning, Ministers had assumed they were on top of the crisis, that the political threat that arose because of the dreadful human tragedies was being contained.

Yesterday, with Mhic Mhathúna’s powerful testimony, and the revelation later in the day at the Public Accounts Committee that the HSE had prepared to deal with the media and legal fallout from what the organisation called “screening did not diagnose my cancer” headlines, that faith evaporated.

The day which began with Ms Mhic Mhathúna’s devastating interview ended with the resignation of Tony O’Brien. His may not be the last head to roll.