Canadian Parliament Sergeant-at-Arms Kevin Vickers receives a hero's welcome in the House of Commons the day after he shot dead the gunman who opened fire inside a parliament building and fatally shot a soldier at a war memorial. Video: Reuters 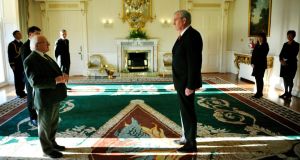 The new Canadian ambassador to Ireland, who famously thwarted a gunman’s attack on the Canadian parliament in October, yesterday presented his credentials to President Michael D Higgins at a ceremony in Áras an Uachtaráin.

Kevin Vickers (58), who was the sergeant-at-arms in Canada’s House of Commons at the time, shot Michael Zehaf-Bibeau after he killed a soldier and stormed Parliament Hill in Ottawa on October 22nd.

Mr Vickers was honoured with a standing ovation by Canadian parliamentarians after he entered the House for Commons for the first time after the incident, a gesture that left him moved.

During yesterday’s ceremony, Mr Vickers, who is a descendant of Irish emigrants, spoke about his Irish heritage and the links between Ireland and Canada.

“Canada is a great country,” he said. “It is a great country because the Irish made it that way. My people come from Cork. They were fortunate enough to arrive in 1826, but there are many more of your countrymen who were not so fortunate.”

Mr Higgins said he was “very moved” by Mr Vickers’s reference to the large numbers of Irish people who had lost their lives when attempting to emigrate to Canada.

“You are part of the Irish story,” he said. “The deep bond between our two countries has been forged by generations of Irish men and women who chose to make Canada their home and, in more recent times, the many Canadians who have chosen to live and work with us here.

“Over time, these personal ties to family, to community and to ancestral roots have manifested themselves in political, cultural and economic partnerships, and in a clear affinity between both nations.

“You and your family are part of this story, and I am sure that your Irish-Canadian perspective will serve you well in further strengthening these ties.”

Mr Vickers replaces Loyola Hearn in the role. He has served as a senior security officer for Canada’s government since 2006 after a 29-year career in the Royal Canadian Mounted Police, during which, it is reported, he never fired a shot at a suspect.

He presented his credentials alongside the new Armenian and Bolivian ambassadors.

This article has been ammended to correct a factual error.