Calleary steps down as deputy leader of Fianna Fáil 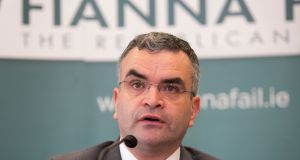 Dara Calleary is the second minister for agriculture to resign since the formation of the new Government. File photograph: Gareth Chaney/Collins

Former minister for agriculture Dara Calleary has resigned from his position as deputy leader of Fianna Fáil following the controversy over his attendance at a golf society dinner.

Sources within the party suggested that Mr Martin is in “no hurry” to replace his deputy leader and that this may not happen for several weeks at least. “He is fully concentrating on getting children back to schools and on responding to the pandemic, this will not be top of the list.”

The position of deputy leader is viewed as an “honorary role” and there will not be any successors lined up for the time being with some in the party suggesting this was also partially out of respect for Mr Calleary, who resigned his ministerial portfolio last Friday.

It comes as Mr Martin on Monday wrote to Ceann Comhairle Seán Ó Fearghaíl asking him to recall the Dáil on Wednesday and Thursday of next week. Pending a final decision from the Dáil’s business committee, it is expected that the new Minister for Agriculture will be appointed next Wednesday, September 2nd.

There has been speculation that Fianna Fáil TD Charlie McConalogue could take up the position. Speaking to local radio today he said he has not yet spoken to Mr Martin but added, “I certainly would be willing to serve”.

Mr Calleary became the second minister for agriculture to resign from the portfolio since the formation of the new Government after Barry Cowen’s resignation.

The Dáil had not been scheduled to sit again until September 15th. Opposition politicians had called for an earlier return and for politicians to resume Dáil sittings as early as Tuesday.

Sinn Féin leader Mary Lou McDonald said that to delay the Dáil’s return would be “wrong” while Labour TD Aodhán Ó Ríordáin said such a move did not make sense given the return to school for many students this week.

“There’s clearly a lot of anger amongst the public about what has transpired last week. The Dáil should be back in session tomorrow, Tuesday, we shouldn’t be waiting another 10 days,” he said.

Speaking on RTÉ Radio 1 this morning Mr Martin said “the Opposition leaders have come back from their holidays saying that they want the Dáil this week. I have been working right through July and August. We want to concentrate our energies on getting the schools reopened; the Dáil is coming back next week, what’s the big deal?”