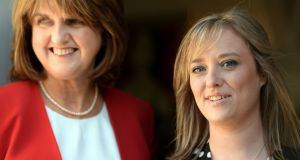 Mairia Cahill has insisted she has no issue with Sinn Féin proposing a candidate to contest her in the Seanad by-election.

Ms Cahill was unveiled as the Labour Party’s chosen candidate for the seat left vacant by Senator Jimmy Harte.

Sinn Féin is intending to select their own nominee for the by-election.

“That is democracy, that is politics,” said Ms Cahill. “They are entitled to.”

Sinn Féin’s Ard Comhairle is to meet this weekend to decide on whether to put forward a candidate for the by-election.

Ms Cahill has claimed she was a victim of sexual abuse in the republican movement and has been heavily critical of Sinn Féin and its leader Gerry Adams.

She told reporters on Wednesday that she would have no issue meeting Mr Adams, or the party’s deputy leader Mary Lou McDonald, in the corridors of Leinster House.

Nominations for the by-election close on October 15th and ballots are to be distibited to all members on October 30th.

A result will be declared on November 13th.