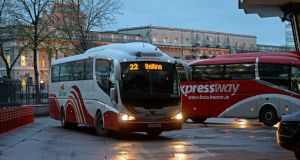 Closing down the Expressway service may be the only viable way to save Bus Éireann from collapse. Photograph: Eric Luke

Staff in Bus Éireann are to be presented with a range of cost-saving proposals by management on Monday after the war of words over the future of the loss-making company escalated over the weekend.

In a statement NBRU general secretary Dermot O’Leary said that “throughout the period when Bus Éireann was haemorrhaging money as a result of Government policy the National Transport Authority were spending over €40 million on consultants and vanity projects . . . increased administration and office costs in 2015 to €11 million, provided bonuses to top executives of €500,000 and the taxpayer is on the hook for €17.8 million for the NTA gold-plated defined benefit pension scheme”.

A spokesman for the NTA said it was a fully transparent public body which had been before the Oireachtas transport committee twice in the past two months. All information was available in its published reports, he said.

Trade unions and Fianna Fáil also criticised the Minister for Transport, Shane Ross, though a spokeswoman for Mr Ross said he wished to reassure people in rural Ireland that they would not be left without services as a result of any Bus Éireann restructuring.

The proposals are likely to include a ban on staff overtime and the elimination of the carry-over of annual leave in an effort to save up to €8 million in the face of mounting losses. Consultants Grant Thornton have warned the State-owned company that it is facing possible insolvency.

Mr O’Leary said the company was trying to condition staff “into accepting cuts to terms and conditions”.

“Turning the spotlight on staff is a sad reflection on the new management structure at the company and demonstrates quite clearly for us that they are being puppeteered into providing an escape route for the shareholder whose responsibility it is to provide and support essential transport links for all of the citizens of the State.”

Bus Éireann is also expected to implement a ban on recruitment and chartering buses from outside companies will be prohibited.

It follows reports in The Irish Times of the Grant Thornton review last week, in which it was revealed that closing down the company’s Expressway service may be the only viable way to save it from financial collapse.

Bus drivers’ unions have already stated their opposition to the idea of winding down Expressway, which could result in the loss of over 500 jobs.

Mr Ross held discussions with the NTA on Friday with a view to providing alternative services for passengers if Bus Éireann is unable to maintain its current timetable due to financial constraints.

Fianna Fáil spokesman on transport Robert Troy said yesterday that it was “not acceptable for Minister Shane Ross to continue to take a back seat” in addressing the crisis.

“Minister Ross has once again failed to show any leadership, and this trait is fast becoming the hallmark of his Ministry,” Mr Troy said. “Despite being aware of the financial problems at Bus Éireann, he failed to bring the issue to Cabinet until just before Christmas. Unless Minister Ross wakes up to the problems at Bus Éireann, the public will suffer the consequences once again.”

Trade union Unite, which represents craft workers in Bus Éireann, has called for the Grant Thornton report to be published along with the terms of reference given to the consultants. Unite regional officer Willie Quigley said his members had been “subjected to a barrage of leaks in the media”.

“It is time to stop leaking and start talking,” Mr Quigley said.