No Labour coalition with SF in light of latter’s economic and fiscal policies, says Tánaiste 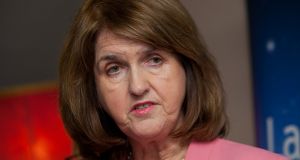 Tánaiste Joan Burton has said she did not believe the Sinn Féin leadership was serious about going into government with the policies they are currently promoting. File photograph: Gareth Chaney/Collins

Tánaiste Joan Burton has ruled out the Labour Party joining in any coalition with Sinn Féin, saying she would not jeopardise the country’s future by doing anything that would help Sinn Féin get into power with its current set of economic and fiscal policies.

A number of Sinn Féin TDs had expressed a preference for the party entering a coalition with Labour in the wake of leader Gerry Adams’s indication the party would not rule out coalition with Fianna Fáil, but Ms Burton dismissed the idea of Labour doing any deal with Sinn Féin.

Ms Burton said she did not believe the Sinn Féin leadership was serious about going into government with the policies they are currently promoting, given the funding available to the State and the party’s plans to abolish other revenue sources such as water charges and property tax.

“They also say they are also going to spend huge amounts of additional funds and yet they are going to [have] significantly less taxation and that simply does not add up, and I would not jeopardise the country’s future in any way by seeing it going into the hands of Sinn Féin,” she said.

Speaking in Cork where she was viewing an exhibition of photographs at Crawford Art Gallery, Ms Burton said that privately many Sinn Féin members outside of the party leadership were encouraging and supportive of many of the measures introduced by Labour and its achievements while in government.

“I think the honest reality is that a lot of Sinn Féin TDs would only love if the party was to be able to do what the Labour Party has been doing in government. Privately among Sinn Féin people there’s a lot of encouragement and support for what Labour has been able to do.

“We have been able to put funding back into education and schools, and this week we have seen improvements to social welfare payments such as the Christmas bonus - I’m aware that they would love to have a programme like that which they don’t have,” she said.