Budget 2021: Sinn Féin says ‘now is not the time for fiscal conservatism’ 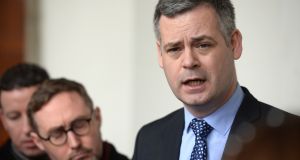 Sinn Féin would spend €5.3 billion more than the Government plans to in Budget 2021, arguing that “now is not the time for fiscal conservatism”.

In its alternative budget proposal, Sinn Féin says the extra spending would be partially covered by the introduction of “progressive tax measures”.

The party also says it would introduce a new rate of employers’ PRSI on incomes above €100,000, starting at 12.05 per cent next year. It has also said it would raise €720 million by putting an 80 per cent cap on “capital allowances claimed against intangible assets on-shored by multinationals since 2015”.

“This increase in current spending would be partially funded by progressive tax measures worth €1.5 billion, bringing net additional current expenditure to €3.8 billion,” Sinn Féin says in the document.

“Now is not the time for fiscal conservatism, which will only increase unemployment, lengthen the recession and damage the ability of our economy to recover quickly.

“Sinn Féin’s proposals would be funded through sustainable borrowing and the introduction of progressive tax measures that contribute towards our national recovery as we build a better future, building on the solidarity that has been shown in our families and communities.”

Were it in Government, Sinn Féin says it would reverse cuts to the pandemic unemployment payment and introduce a “wage support scheme” costing €1.5 billion. The party has also promised a once-off reduction in Vat - from 13.5 per cent to 9 per cent - for sectors affected by Covid-19 such as hospitality and a commercial rates waiver until June.

The proposal also pledges to recruit an additional 2,500 doctors, nurses, consultants and allied health professionals to staff hospitals and give current workers a break at a cost of €150 million.