Fiach Kelly asks Michael Noonan about the provisions for Budget 2015.

The highlights from Minister for Finance Michael Noonan's Budget 2015 speech. 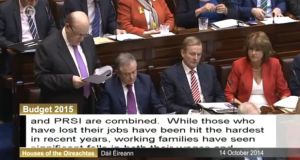 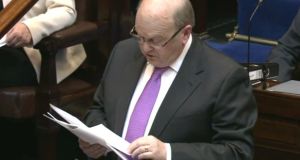 Minister for Finance Michael Noonan has said in his budget address that the State’s deficit will fall to 3.7 per cent of GDP at the end of this year. Photograph: Oireachtas screengrab.

Minister for Finance Michael Noonan has announced plans to reduce the Universal Social Charge and the higher rate of income tax, and introduce measures that he says will lessen the impact of water charges on families.

In his budget speech, Mr Noonan also announced plans to abolish the “double Irish” tax loophole; retain a 9 per cent VAT rate for the hospitality sector and reduce the pension levy, with a view to abolishing it in 2016.

While Mr Noonan said excise duty on alcohol will not increase and the price of petrol and diesel will remain unchanged, the cost of 20 cigarettes is to increase by 40 cent.

Minister for Public Expenditure Brendan Howlin said overall expenditure is to increase to more than €50 billion next year, up €429 million on this year - with the increases going to “critical areas” such as social protection, health, education, justice and housing. He said there would be no cuts to social welfare schemes and a social housing building programme was to commence.

Mr Howlin said the rate of Child Benefit would increase by €5 per child from January and would go up by a further €5 in 2016 if circumstances allowed.

He said 180,000 older people would benefit from a €9 weekly increase to the Living Alone Allowance.

All recipients of core social welfare payments will receive a Christmas bonus this year of 25 per cent of their weekly payment, he said.

Mr Noonan said the entry point to the Universal Social Charge was increasing to just above €12,000, which would see 80,000 low income workers relieved of the charge.

Mr Howlin said a Water Subsidy worth €100 per year would be granted to all recipients of the Household Benefits Package and Fuel Allowance, with the measures benefitting 653,000 households.

Other measures on the taxation side include an extension of a three year corporation tax relief for start-up companies; the removal of stamp duty on agricultural leases longer than five years; and Capital Acquisitions Tax relief for the transfer of agricultural property.

In terms of fiscal projections, Mr Noonan said the State’s deficit would be 3.7 per cent of GDP at the end of this year, with economic growth of 4.7 per cent expected this year. He said the State is forecast to return a deficit of 2.7 per cent in 2015 - ahead of a previous forecast of 2.9 per cent and below a target of below 3 per cent set by the EU and IMF as part of the bailout.

“The road we have travelled to get to this point has been very difficult and the Irish people have made major sacrifices, but the policies pursued by this Government have worked and the recovery in the Irish economy is well under way,” Mr Noonan said.

“Budget 2015 is about securing the recovery, building for the future and broadening it to families across the country,” he said. “This Government will not be returning to the boom and bust model of the past that has spectacularly and repeatedly failed the Irish people.”

He said he expected economic growth of 3.4 per cent in 2016, 2017 and 2018. “This is the type of solid and steady economic growth that we want in the coming years,” he said. “Achieving a deficit below 3 per cent does not signal an end to fiscal prudence in Ireland.”

Mr Noonan said the tax measures he announced today would cost an estimated €585 million next year.

On corporation tax, he said the State’s 12.5 per cent rate was “settled policy, it will not change”.

However, he said he was abolishing the ability of companies to use the “Double Irish” loophole by changing residency rules to require all companies registered in Ireland to also be tax resident. The change will take from January for new companies and the end of 2020 for existing companies.

“This proactive change will not bring an end to international tax planning; that requires co-ordinated action by all countries. By taking action now and making this change as part of a broader reform of our corporate tax system, we are giving certainty to investors about corporate tax in Ireland for the next decade,” he said.

The pension levy is to fall from 0.75 per cent to 0.15 per cent next year before being abolished from 2016 onwards, he said.

Mr Noonan announced plans to make the transfer of land for agricultural use easier and said a 9 per cent rate of VAT for the hospitality sector was being maintained. A home renovation initiative is being extended to rental properties, he said.

Mr Howlin confirmed plans to recruit new teachers and gardaí and said he intends to launch a new plan for Civil Service Renewal in the coming weeks.

“This marks the end of the moratorium on recruitment but in a targeted and focused way,” he said.

Mr Howlin said this was “a significant day” as it “marks the end of an era” of budgetary austerity.

“This time last year, we estimated that to meet our budget deficit target would require further cuts of €1.3 billion on the spending side. That we are now in a position to increase expenditure, responsibly, indicates the progress we have made.”

Closing his speech, Mr Howlin said “we still have a way to go. But our collective achievement in the face of adversity is a considerable one”

“There remain challenges ahead. But, discipline, hard won, will not be jeopardised. Irish people will not thank anybody who forgets and repeats the mistakes of the past.

“As we enter a new era in Irish history, that is this Government’s commitment to the Irish people.”