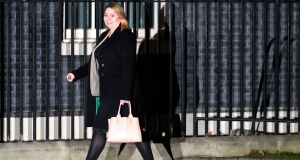 There was an expectation that Tánaiste Simon Coveney and Mr Brokenshire would this week announce a new push to try to get the DUP and Sinn Féin to finally agree a deal to restore the Northern Executive and Assembly.

This week was viewed as particularly timely as Tuesday is the first anniversary of the late Martin McGuinness resigning as Sinn Féin deputy first minister, thus effectively collapsing the powersharing administration.

Both the DUP and Sinn Féin insist they want to see the powersharing institutions relaunched, but have been unable to reach a deal despite months of talks. The two governments are committed to a final push to seek an agreement this month.

However, the unexpected announcement in British prime minister Theresa May’s reshuffle that Mr Brokenshire was standing down as northern secretary means, the British and Irish governments have privately acknowledged, that plans for such negotiations must be postponed.

Ms May was quick to appoint a successor in the culture secretary Karen Bradley. Ms Bradley (47) has been an MP for Staffordshire Moorlands since 2010.

Dublin and London recognise that Ms Bradley will need time “to read herself” into her brief, meet officials in the Northern Ireland Office and get to know the key players in Stormont before she can consider pressing the DUP and Sinn Féin to make a new attempt to end the political logjam.

The two governments, however, hope the postponement will be short. Officials already are trying to arrange a meeting between Ms Bradley and Mr Coveney when he returns from the Middle East later this week. When that happens will depend on ministerial diaries, although Dublin is anxious it should take place as “soon as possible”.

In her first statement as Northern Secretary, Ms Bradley said restoring the Executive was her top priority. “We must also continue the work to deliver a Brexit that recognises Northern Ireland’s unique circumstances and avoids a hard border on the island of Ireland while maintaining the economic and constitutional integrity of the United Kingdom,” she added.

Mr Brokenshire said on Monday he was resigning so he can be treated for a lung condition. He said recent health tests revealed he had a “small lesion” on his right lung which will require surgical removal.