Northern Ireland archives: Tánaiste ‘reportedly said it was his first official visit to Co Antrim as Minister for the Gaeltacht’ 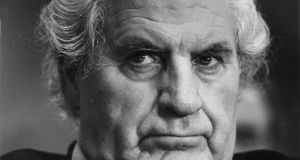 An uncleared visit by an Irish government minister to Northern Ireland in 1992 angered British officials, according to previously confidential files released today in Belfast. The usual protocols had not been followed, while a Stormont official claimed that the RUC had been informed of John Wilson’s visit in Irish and at short notice.

The issue is raised in a despatch to the Foreign and Commonwealth Office (FCO) and Northern Ireland Office from David Blatherwick, British ambassador to Dublin, dated May 18th, 1992. Headed “Tanaiste’s visit to Antrim”, the diplomat referred to an Irish Times report that John Wilson, the Fianna Fáil tánaiste and minister for the gaeltacht had officially opened an Irish cultural festival at Dunloy in Co Antrim. According to the memo, the tánaiste ‘reportedly said that it was his first official visit to County Antrim as Minister for the Gaeltacht. The Department of Foreign Affairs (DFA) whom we have asked about the reports, say they knew nothing of the visit in advance. Nor, we understand, did the Northern Ireland Office”.

Blatherwick told the British foreign secretary, Douglas Hurd of the implications of the unannounced visit: “For Wilson to visit Northern Ireland in this way without informing us is at best a discourtesy. We can also justifiably complain on security grounds since the RUC were responsible for his safety. I recommend that I be instructed to speak accordingly to[Noel] Dorr [Secretary at the Department of Foreign Affairs in Dublin], reminding him of the need to let us know of such visits in good time in future.”

However, in a handwritten note on the file, David Fell, a senior Stormont official, claimed that “the RUC had been told of the visit, albeit in Irish and perhaps with little notice”. He suggested that this should be followed up “to avoid embarrassment to HMG [Her Majesty’s Government]”. The ambassador’s despatch drew a response from the British Foreign Secretary, Douglas Hurd on May 21st, 1992. Hurd (himself a former NI Secretary) expressed surprise that “the Irish did not inform us in advance of the Tánaiste’s visit.’ He instructed Blatherwick to take the matter up with the DFA and convey “British regret” and the view that they would “normally” expect to be told if an Irish government minister was visiting Northern Ireland. “Apart from other considerations”, Hurd wrote, “if the RUC are to [ensure] visitors’ safety, they need to know their plans in good time”.