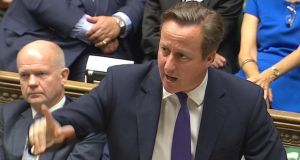 ‘The Conservatives seek to justify an isolationist human rights policy, detached in some respects from the ECHR’. Above, David Cameron addressing the House of Commons. REUTERS

The 2003 Act came about, in part, due to Ireland’s obligations under the Belfast Agreement, where the government committed to ensuring “at least an equivalent level of protection of human rights” with Northern Ireland.

They have indicated that the convention and decisions of the Strasbourg court will continue to bind the UK, but only where the Council of Europe, the body responsible for the creation of the human rights convention, gives in to British demands for reinterpreting the convention.

Where the Council of Europe refuses to do this, the Conservatives have indicated they will withdraw Britain from the convention and repudiate the jurisdiction of the European Court of Human Rights.

Regardless of whether the UK stays under the remit of the convention, the Conservatives are proposing a British Bill of rights and responsibilities that will be littered with “common sense” approaches to protecting “serious” human rights and disposing of human rights deemed “trivial”.

Protecting human rights in the UK fails in any way to engage with the Irish dimension to this debate. In the Belfast Agreement, the UK committed itself to incorporating the European Convention on Human Rights into the law of Northern Ireland. This was done through the Human Rights Act 1998 and the Northern Ireland Act 1998.

The latter Act prohibits the Northern Ireland Assembly from adopting laws that contravene the rights established under the convention; prevents the Assembly from modifying the Human Rights Act 1998; empowers the Assembly to ask the Northern Ireland Human Rights Commission if a Bill is incompatible with human rights, including rights set down in the convention; and prevents an Assembly Minister and his/her department from approving any subordinate legislation that is incompatible with rights under the convention.

Any British Bill of rights and responsibilities must, at least for Northern Ireland, reflect the minimum rights protections under the convention. If this is not the case, then it would break its international agreement with Ireland on the protection of human rights in Northern Ireland.

The Minister for Justice and Equality and Minister for Foreign Affairs should make the British government aware of its obligations to ensure the protection of human rights in Northern Ireland is at least to the level obligated by the convention. Otherwise, the value and purpose of the human rights provisions in the Belfast Agreement will be significantly lessened.

Seven years later, the Oireachtas has not brought Irish law into compliance with our obligations under the European Convention on Human Rights. While there has been some movement on the rights of transgendered persons, including the publication of the general scheme of the Gender Recognition Bill, some seven years after the High Court decision in the Foy case, Ireland is still in breach of its obligations under the convention.

Rather than seeing this as a lesson on the futility of the ECHR Act 2003, the Government should urgently seek to ensure our laws comply with the minimum standards of rights protection established under the convention.

This will ensure that when Government representations are made to any future British government seeking to welch on its human rights commitments in Northern Ireland, that our own approach to the convention is one of compliance and respect for the fundamental values that the convention espouses.

Dr Liam Thornton is a lecturer in UCD school of law and a member of UCD human rights network. His co-edited collection, with Suzanne Egan and Judy Walsh, Ireland and the European Convention on Human Rights: 60 Years and Beyond, is published by Bloomsbury this month.