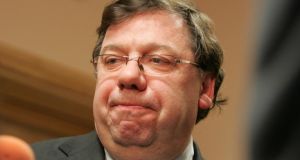 “Mr Martin will lead us into the next general election and it is our duty, as members of the party, to support him in every way and those candidates who are coming forward,’’ he said.

Mr Cowen said there was a job of work to be done by the party and members should focus on that. “Everything else is really peripheral, I think, and does not really contribute to putting Fianna Fáil back where we want to put it,’’ he added.

The former taoiseach was speaking to journalists on Friday night, in Killarney, Co Kerry, where he launched the autobiography of former South Kerry Fianna Fáil TD and minister of state John O’Leary, On The Doorsteps, Memoirs of a long-serving TD.

Asked if he agreed with Mr O’Leary’s view that Fianna Fáil should return to a left-of-centre position in Irish politics, Mr Cowen said he would not return to the political fold, given that he was just a member of the party now and would leave policy to the leadership.

“I would say Fianna Fáil has always been a party for working people,’’ he added. “It is a party, I believe, which has a proud record of achievement in terms of its policies in social welfare, income support, and in a whole range of areas.”

He said the party’s membership reflected that broad centre-ground policy required to ensure the country was successful economically again.

Mr Cowen also said there was no question that he overruled Brian Lenihan when the then minister for finance reportedly argued Anglo Irish Bank and Irish Nationwide should be nationalised instead of including them in the State bank guarantee of 2008.

Mr Cowen also denied he dismissed Mr Lenihan’s arguments that subordinated or junior bank debt should not be included in the guarantee.

Asked if any mistakes had been made, Mr Cowen replied: “Of course, mistakes were made. You can only go on the basis of information made available to you at the time and, of course, with the benefit of hindsight all of us can look at various other options that might have been available.’’

Mr Cowen was responding to observations made to the Oireachtas banking inquiry by Central Bank governor Prof Patrick Honohan who said Mr Lenihan was overruled by a senior politician on some issues when the Cabinet met to consider the economic crisis in 2008.