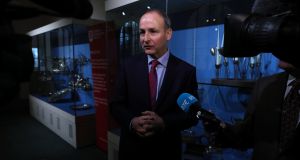 On Tuesday, similar to most Dáil sitting days over the past few weeks, negotiating teams from Fianna Fáil and Fine Gael made their way to a room in Agriculture House on Kildare Street to discuss the future of the minority Government.

On Tuesday, like most days the talks have been held, not many people cared.

The process of reviewing the confidence-and-supply deal, which could lead to its renegotiation and extension, has been under way since budget day on October 9th. Yet it has been devoid of tension and drama, principally because the threat of an immediate election has been removed.

The opportunity for Taoiseach Leo Varadkar to go to the country before Christmas has passed. Fianna Fáil leader Micheál Martin’s offer stands: not to collapse the Government until March, when both the House of Commons and European Parliament will have voted on the Brexit withdrawal agreement.

Fine Gael has consistently pressured Fianna Fáil to renegotiate an extension. Yet the party which provides minority support to the Fine Gael Government has thus maintained that a retrospective review of the deal’s operation must come first.

All sessions to date have comprised briefings from Government officials. No new policy proposals or negotiating papers have been tabled.

A lot can happen between now and then, especially on Brexit

Those on both sides say the talks have been professional. Each team comprises four TDs: Simon Coveney, Paschal Donohoe, Regina Doherty and Martin Heydon for Fine Gael, and Dara Calleary, Michael McGrath, Lisa Chambers and Charlie McConalogue for Fianna Fáil.

Those involved have been impressed by how Brian Murphy and Deirdre Gillane, respectively Varadkar’s chief of staff and Martin’s chef de cabinet, have run the talks, too.

But for some in Fine Gael, the process has seemed interminable. One Minister, not centrally involved, has expressed fears Fine Gael is allowing Fianna Fáil see exactly what is not working in government, effectively allowing Martin’s team draft their election manifesto.

Others are more patient. One senior Fine Gael figure said both parties could assess “how things look in January”.

“A lot can happen between now and then, especially on Brexit,” the source said.

Other parties, it was added, have not been gaining in opinion polls, an assessment shared in Fianna Fáil. “It looks like the centre ground is recovering,” said a senior party source.

Those at the top of Fine Gael understand the rationale for the review, and acknowledge that if Fianna Fáil is to agree an extension it will need to show it has secured a significant policy win.

There is no point in Fianna Fáil asking for something that cannot be delivered, and part of the review is to assess what can be achieved.

Martin will also need the backing of his frontbench and parliamentary party, with opinion divided on the merits of an extension, for whatever decision he takes.

As Ministers publicly goaded Fianna Fáil at the recent Fine Gael ardfheis, a senior Fine Gael figure privately acknowledged that Martin must be able to look each member of his frontbench in the eye and say his negotiators raised their policy concerns – be they education, agriculture or transport – during the review process.

But the review will not hold the process back forever. The key issues of housing and health have been largely dealt with, and the national broadband plan is expected to be discussed on Thursday.

Fianna Fáil TDs expect Martin to give an indication soon – possibly next week – on whether he believes there are grounds to renegotiate and extend confidence and supply.

The Fianna Fáil leader has a definite strategy in mind, but hasn’t shared it with anyone in his parliamentary party – not even his negotiators.

Most TDs believe he wants to extend the deal, possibly by another year, with one frontbench member saying: “He thinks people will give him credit for it in the end.”

But Brexit overshadows everything. The so-called “meaningful vote” on the Brexit withdrawal agreement takes place in the House of Commons on December 11th, and the Dáil is scheduled to rise for its Christmas recess just over a week later, on December 19th.

In a way, these talks are running parallel with the Brexit talks

If, as expected, Theresa May’s Brexit deal is rejected by MPs at the first time of asking, a political crisis will ensue in London.

Martin recently told RTÉ’s Sean O’Rourke people will know where he stands by Christmas, a statement noted in his own ranks as well as in Fine Gael.

“I keep coming back to that,” said one his TDs, who points to the week between the Brexit vote in the House of Commons and the Dáil rising for Christmas as the likeliest time for Martin and Varadkar to strike a deal, if both decide to do so.

“In a way, these talks are running parallel with the Brexit talks,” the source said. “I think you’ll see them both come to a head the same week.”