Pressure mounting for breakthrough ahead of EU leaders’ video conference 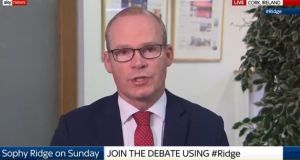 Minister for Foreign Affairs Simon Coveney has warned that the EU will not ratify a trade deal with the UK if it tries to reintroduce parts of controversial legislation aimed at overriding international law.

British prime minister Boris Johnson suffered an overwhelming defeat in the House of Lords late on Monday over the Internal Market Bill, which would allow ministers to break international law by reneging on parts of the Brexit withdrawal agreement reached with the EU last year.

Peers voted by 433 to 165 to remove clauses from the Bill that would give ministers the right to unilaterally disapply parts of the Northern Ireland protocol and its requirement for some customs checks on the Irish Sea between the North and Britain to avoid the necessity of a hard border on the island of Ireland.

Speaking on Sky News on Sunday, Mr Coveney said: “If the British government is determined to continue with their Internal Market Bill, to reintroduce parts of that Bill that were removed by the House of Lords this week, then I think this is a deal that won’t be ratified by the EU because there’s no way the EU would agree to ratify a new agreement if the British government is breaking the existing agreement – which is not even 12 months old.”

Referring to post-Brexit trade deal negotiations, Mr Coveney said: “I think I would sum it up by saying this is very difficult, but, it’s also very doable.

“And I think the consequences of not getting a trade deal and a future relationship deal... before the end of the year, I think is very significant.”

He said there was a need to dial down the language between the EU and UK in the Brexit talks.

He told Sky News’s Sophy Ridge On Sunday: “The EU has said that it will have to take legal action against the UK if they proceed with breaking international law.”

He added that “the truth is the two sides are very far apart, in terms of the expectations on the British side and the negotiating mandate that Michel Barnier has on the EU side”.

Talks between Britain and the European Union broke off after a week of intense negotiations in London this week that were overshadowed by turmoil in Downing Street, in which senior aides to Mr Johnson resigned and there was speculation about the position of chief negotiator David Frost.

At one point, chief EU negotiator Michel Barnier took a break from negotiations and posted an image of himself “looking for level playing fields” in a London park.

The EU wants a deal by mid-November in order for it to be ratified by the time the transition arrangements expire at the end of the year and the UK leaves the customs union and single market.

Without a deal being struck, trade between the UK and EU will be subject to tariffs set out by the World Trade Organisation (WTO).

However, on Sunday afternoon, the UK hinted that Brexit talks could stretch out beyond this week. British environment secretary George Eustice said it would be possible to “squeeze out extra time” if the two sides were close to an agreement.

Britain’s chief Brexit negotiator David Frost said on Sunday that he was heading back to Brussels for more discussions with his European Union counterpart Michel Barnier, and that the UK “will not be changing” its position in the coming talks.

There has been “some progress in a positive direction in recent days,” he said, while cautioning that “we may not succeed.”

With Britain’s December 31st exit fast approaching, both the UK and the bloc “recognise that time is very short,” Mr Eustice told Sky News’s Sophy Ridge on Sunday. “This needs to be a week when things move, when we break through some of these difficult issues, and get a resolution, and at least have some sort of headlines of an agreement,” he said.

“Otherwise it gets quite difficult and we do start to run out of time to implement it.”

Still, he noted “you can always squeeze out extra time if you need to -- if you are nearly there.” The issues of state aid and fishing remain sticking points, Mr Eustice added. - PA, Bloomberg