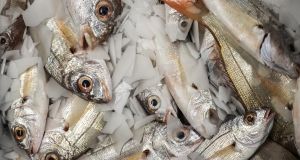 Fishing quotas are one of the biggest areas of conflict as the negotiations reach endgame. Photograph: Balint Porneczi/Bloomberg

The Taoiseach has warned that with less than a month to go to before the final Brexit deadline it would be prudent to prepare contingency measures for a no-deal outcome.

Speaking in advance of the two-day meeting of EU leaders in Brussels on December 10th and11th Micheál Martin told the Dáil he expected those contingency measures to be discussed over the next seven days.

The House also heard warnings of the potential for “conflict at sea” in the event of no deal because of the impact on fishing rights.

Fishing quotas are one of the biggest areas of conflict as the negotiations reach endgame.

Social Democrats Brexit spokesman Cian O’Callaghan expressed concern that “the operational capacity of the Naval Service is not what it should be, which is quite concerning in terms of Brexit”.

But he said the UK does not hold all the cards in the talks because it netted more than €1 billion worth of extra fish in the past decade because of access to EU fisheries.

“We also know that its fleet does not have sufficient capacity to catch all the fish in UK waters.

“The UK is very reliant on exports. Some 80per cent of scallops, squid, sole and ray caught by UK vessels are exported to the European Union.”

Mr O’Callaghan said it was “very important that Ireland and the EU hold fast in the negotiations and that we agree a common approach on fisheries and on measures to conserve fish stocks in the future”.

Mr Martin said negotiations continued between the EU and the UK but “one month out from the end of transition we have now reached a point in time when prudence demands that we must proceed with preparations for EU contingency measures in case of no deal”.

He told the Dáil next week’s Council meeting “will be an opportunity to reflect with other EU leaders on the outcome of the negotiations and to chart our critical next steps, deal or no deal”.

He hoped a deal could be done, which meant “reaching agreement on level playing field issues, fisheries and much more”, including governance.

She said “the British negotiating team insists that all fish in British waters are British fish, regardless of species, spawning grounds, migratory patterns and historical access” and they wanted annual quota negotiations.

Ms McDonald said 34 per cent of the Irish fishing fleet’s annual catch was taken from British waters. She said it was an opportunity for the EU to look at the lack of fairness that exists particularly in Ireland for fishing fleets.

The Dublin Central TD also warned that as the pressure increases “there can be no blinking on the part of the EU negotiating team or by the Irish Government when it comes to the Irish protocol”.

She added: “We must continue to ensure that a final agreement defends the interest of all the people of Ireland.”

Labour foreign affairs spokesman Brendan Howlin said the new ferry service from Rosslare to Dunkirk is heavily booked already which belied the claim by the Department of Transport and the Irish Maritime Development Office that there was adequate connectivity.

“Thank God there are companies willing to invest their own money to provide these services and we are not dependent on the planning being done by the authorities,” he said.

The Wexford TD also said that reports of a revised UK offer on fishing quotas, demanding 60 per cent of catch, down from 80 per cent remained “very far off an acceptable mark”.