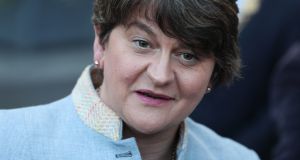 Good morning. DUP leader Arlene Foster came to Dublin yesterday evening to attend a dinner given by the Dublin Chamber of Commerce, and she came with something to say: the DUP could accept post-Brexit arrangements that are specific to Northern Ireland, as long as they 1) are approved by the North’s politicians and 2) don’t affect the constitutional position.

This is a significant shift from the DUP, and the immediate hope in Dublin and London was it could enable some form of Northern Ireland-only backstop. But hold the weddin’: Mrs Foster also stressed the backstop as currently envisaged for the North would have to go and that Northern membership of the single market and the customs union, which could entail a customs border between the North and Britain, is a non-runner.

1 A letter to Ireland from Italy: this is what we know about your future
2 Coronavirus: Ireland should ‘look seriously’ at closing borders to keep new infections out
3 Sam McConkey: Tough next steps against coronavirus will require political consensus
4 'The last time I saw her was when she was being put into the ambulance'
5 Insolvency lawyer warns of ‘disaster’ if firms reject Covid-19 wage subsidies
6 Engineers gather to produce ‘battlefield’ ventilator in war on Covid-19
7 Workers may face tax bill on emergency State wage subsidy
8 Coronavirus and children: The red flag symptons to watch for
9 People should carry ‘evidence’ of travel reasons if exceeding 2km limit
10 The Irish father-son team who set a world record marathon finish
11 10 hilarious Irish comedy videos to watch on YouTube
12 Coronavirus: ‘Fundamental shift’ in electricity use, says Eirgrid
13 Ken Early: Despite coronavirus, Premier League season must be finished if at all possible
14 Faults in China-supplied coronavirus equipment reported in Europe
15 Cocooning Q&A: How does it work? Who must do it? Can people visit my home?
16 Trump boasts of coronavirus ‘ratings’ as top expert warns of up to 200,000 US deaths
17 Una Mullally: Coronavirus response is like providing fire exits only during a blaze
18 Restoration of historic Phoenix Park cottage approved
19 Coronavirus: Japan accused of understating figures because of Olympics
20 No room for bulls**t in the time of coronavirus
21 Brown Thomas and Arnotts suspend online offerings
22 Crash involving Luas tram blocks north Dublin junction
23 AIB and Bank of Ireland suspend shareholder dividends
24 Coronavirus: Government publishes list of essential services
25 Coronavirus: New measures for nursing homes amid concern over 17 clusters
26 Covid-19 crisis to wipe out Q1 housing market recovery
27 Coronavirus: Construction sector most significant part of new shutdown
28 David McWilliams: We need to totally reimagine economics
29 If you think governments are spending money now, just wait
30 Man who allegedly spat at garda brought to court by gardaí in protective gear
31 Hospital consultants to be offered three-month contracts to see only public patients
32 Five million-plus property transaction documents may be digitised
33 Grafton closes Woodies DIY, Glenveagh closes construction sites
34 Coronavirus: Nagging doubts fill hospital staff’s heads
35 Are the travel industry and airlines playing fair in coronavirus crisis?
36 Labour TD says party should consider taking part in government
37 Late Late Show with Miriam O’Callaghan: The most surreal primetime TV I’ve ever watched
38 My favourite sporting moment: When Zidane glided through Brazil in 2006
39 Coronavirus: The list of businesses allowed to stay open under new measures
40 Favourite sporting moment? It’s a bit like choosing your favourite child . . .
Real news has value SUBSCRIBE