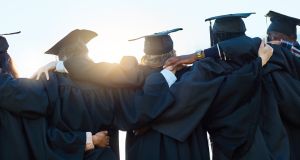 The committee was told that the Departments of Education and Foreign of Affairs are working to ensure that in a no-deal context ‘we will be able to have mutual recognition of qualifications’. File photograph: Getty Images

Minister for Youth Affairs Katherine Zappone has said there could be “bilateral agreements” between Ireland and the UK to ensure there is mutual recognition of qualifications between the jurisdictions following Brexit.

Ms Zappone said the recognition of professional qualifications into the future “poses a particular challenge”.

“The greatest source of potential impact, for areas covered by my department, would be in relation to those qualifications relevant to social work, given the ongoing drive for the recruitment of social workers by Tusla,” she said. “However, the risk associated with any divergence in qualifications is currently considered to be low.”

Ms Zappone was addressing the Oireachtas committee on Children and Youth Affairs on Tuesday about the potential impact of Brexit on young people.

She said the Department of Education and Department of Foreign of Affairs are working to ensure that in a no-deal context “we will be able to have mutual recognition of qualifications”.

“Some of that I think will be referenced in relation to the Bill that we will be publishing but anything that’s not required for a legislative basis, my understanding that in this case as with other issues that we wish to ensure as much as opportunity as possible for our young people, that there could be appropriate bilateral agreements effectively between the jurisdictions,” she said.

Ms Zappone said “we are dealing with a shortage of social workers”, adding that there is a global shortage.

“Tusla is well aware of that and has to accept that and still move forward in terms of finding new solutions to those recruitment challenges,” she said. “I think it’s important to say too that the recognition of qualification only arises in the case obviously of newly qualified workers.”

Cormac Quinlan, Tusla’s director of policy and strategy, said there are a number of approved courses that are set out for social work under the Health and Social Care Act.

“Anyone outside of that can apply through Coru [the health and social care regulator] for recognition process so there’s no automatic approval of courses from the UK as such. You apply based on your course content and relevant work experience you have,” he said.

Mr Quinlan said there shouldn’t be “any blockages to anyone” even in a no-deal Brexit of being able to apply through Coru to have qualifications recognised in Ireland.

Separately, the committee heard the former Labour party leader Pat Rabbitte will appear before it next Wednesday to discuss his new role as chairman of Tusla.