Organisation of the Troubles era is gone, but its inevitable echoes and legacies remain 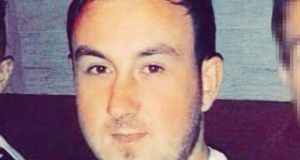 It is a measure of how far Sinn Féin has travelled in recent decades that the decisive breakthrough in the investigation into the murder of a garda during the robbery of a Louth credit union came from the voluntarily-offered assistance of someone close to the party.

That is not something that would likely have happened during the long years of the Northern conflict – or for many years afterwards.

But the revelation the witness in question felt that he had to consult party chiefs before giving a statement to the Garda shows that the journey from enemy of the State to pillar of its politics is not complete.

The party now says the witness was not a member, though according to the account of the investigating garda, Sinn Féin confirmed at the time he was “one of ours”. Whether he was enrolled or not, he was clearly associated with the party.

The witness approached gardaí with information about the murder of Detective Garda Adrian Donohoe – but also said he would need to consult the party before giving a formal statement.

When Detective Inspector Pat Marry approached a Sinn Féin councillor in Co Louth to secure permission, he was told it was a matter for head office. So Marry went to the local TD – Gerry Adams – and sought permission for the man to give a formal statement.

Adams, Marry says, promised to help and a couple of weeks later came back to him and said the witness would co-operate. It was, Marry says, the most important breakthrough in the investigation, as it focused Garda inquiries in New York, where Aaron Brady, the man eventually convicted of the murder, was living.

A few things may be said in response to all this. The first is that the Sinn Féin associate approached gardaí to help, and his help was ultimately decisive. The second is that the man’s uncertainty about assisting the gardaí, and the party’s reaction to that uncertainty, demonstrates an attitude to criminal justice and policing unique to Sinn Féin.

The witness felt he had to get permission. A party councillor felt he could not give it. And when the party leader was approached, he did not say “Of course he should give you a statement, what is he waiting for?” – he checked it out and came back a few weeks later.

What exactly was being checked out in that few weeks? Was it whether Brady was “one of ours”? And what would the decision have been if he was? Sinn Féin did not respond to the specific question on the time-lag on Tuesday.

Remember, this was not just after the ceasefires and the Belfast Agreement when the IRA held its own private investigations into the Máiría Cahill rape allegations. This was not 2005, when nobody saw Robert McCartney being murdered in a busy Belfast bar. This was in 2017, nearly 20 years after the peace deal.

It suggests that part of the culture of Sinn Féin is an ambiguity about criminal justice matters when they might adversely affect its members or former associates. Perhaps this is not surprising for an organisation that previously lived – at least partially – outside the law. That day is gone; but its inevitable echoes and legacies remain.

None of this is to gainsay the legitimacy of Sinn Féin’s political and electoral mandate. It won the greatest share of the vote in the February general election and has justifiable and realistic ambitions to lead the next government. It has demonstrated it can speak to many younger voters in a way the more established (or Establishment, if you like) parties cannot. But it does add weight to the claims of Fine Gael and Fianna Fáil that Sinn Féin is not a “normal” political party.

It will not scare off Sinn Féin’s legions of younger voters, for whom the Troubles are a part of history. But it will strengthen the aversion of Fianna Fáil and Fine Gael to doing business with Sinn Féin, and make it harder for any leader of either of the two old parties to lead his or her TDs into a coalition led by Mary Lou McDonald.