Bríd Smith claims some Greens ‘raging’ about prospect of coalition 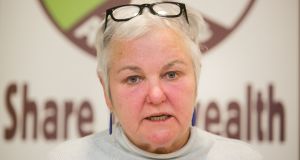 People Before Profit TD Bríd Smith has claimed there is “an argument” opening up in the Green Party about whether or not it should enter into a coalition with Fine Gael or Fianna Fáil following the general election.

The Dublin South-Central TD said the Green Party’s willingness to enter a coalition has “opened up a hornet’s nest amongst their feminist and youth section, who are really raging about it”.

“They’ve [the Green Party] been more clear about it, they would do a deal, but it has opened up a hornet’s nest among their feminist and youth section, who are really raging about it. I think they need to smell the coffee as well and get real about the potential for massively disappointing their voters.”

Eamon Ryan, leader of the Green Party, did not rule out working with any particular party during the RTÉ leaders’ debate on Monday night.

Ms McHugh, a Green Party candidate for Mayo, has previously said she is against the party going into a coalition with either Fine Gael or Fianna Fáil.

However, speaking on RTÉ on Tuesday, Ms McHugh said: “I would only go into coalition with a programme for government I could stand over.”

Ms Smith said there is a “historic opportunity” now to “see the back of” the two largest parties.

“We are at a historic moment in Irish politics because the combined vote of the two conservative parties makes up less than 50 per cent of electorate,” she said.

“The prospect of a radical government that is not run by Fianna Fail or Fine Gael is coming into sight if not at this election then in the near future.”

Ms Smith said parties of the left had been “ate up and spat out by these conservative blocs” in the past, pointing to the experience of Labour and the Green Party in previous coalitions. She said their experiences in Government should act as a warning to Sinn Féin leader Mary Lou McDonald.