Boyd Barrett: Sinn Féin has thrown in the towel on coalition 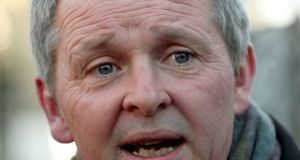 Sinn Féin was criticised on Friday for “throwing in the towel” too early on a left-leaning coalition by one of its prospective partners in such an arrangement.

Richard Boyd Barrett of People Before Profit said on Friday he was surprised by the comments of Sinn Féin’s Eoin Ó Broin that such an arrangement would not be workable.

“I was surprised to hear him saying that. In my view, he is throwing the towel in much too early,” said Mr Boyd-Barrett.

“Fine Gael has said on a number of occasions that it’s up to Sinn Féin to try and form a left-wing coalition. Heather Humphreys [Minister of Business] said it again this morning [on Morning Ireland].

Mr Boyd Barrett said it would be naive to think Fine Gael would provide confidence and supply, but he said there was a possibility it would abstain in a vote for taoiseach and so allow a left-wing government to be formed.

He accepted it would not be stable. There are examples of coalitions in Europe and elsewhere that had deep minorities and had somehow managed to operate, sometimes fulfilling a full term.

“To me, it seems they are throwing in the towel before it has even begun. They know our position. But what are the views of the Green Party and the Social Democrats on this? Are they in favour of a leftist government or are they not?”

Mr Boyd Barrett said a coalition comprising Sinn Féin, the Greens, the Social Democrats and Solidarity People Before Profit, plus left-leaning Independents could muster 65 or more votes and then negotiate with others on a case-by-case basis to get decisions and legislation through the Oireachtas.

Meanwhile, Solidarity became the second left-wing party on Friday to say a government of the left was not possible.

At a press conference, the party called instead for parties of the left to unite and establish a mass social movement that could see a leftist government being formed after the next election.

Cork North Central TD Mick Barry and his colleague Rita Harrold said they could not see a pathway to a left-wing government at present.

“The numbers are not there for a strong left government,” said Mr Barry. “You could have a very weak left minority government which would depend on support from deputies who are opposed to real change.”

He and Ms Harrold called for a social movement to be formed to campaign on key issues like housing, health, climate change, and social equality.

“If other forces like Fine Gael, Fine Gael and right wing independents were to put a government together…if they were to do that such a social movement would fire a shot across their bows or force them to make concessions.

“That would mean that that the opportunity to have a real left government and real change might come sooner rather than later,” he said.

He called for the social movement to be initiate now.

“It would have them under pressure from day one on the issues of real change,”