Both Sinn Féin and DUP damaged by ‘cash for ash’ row

Meltdown since McGuinness resignation not your usual Northern Ireland crisis 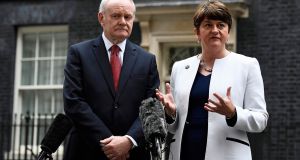 As night falls in Enniskillen, the Cenotaph lights up and the red and white bouquets at its base, remembering the war dead, are caught vividly in its beams.

As the 30th anniversary approaches of the Remembrance Day bomb that killed 11 people, the lighthouse brilliance of this beacon reminds you that Fermanagh’s largest town is a place apart. It doesn’t sit easily with the usual narrative of Northern politics, which emphasises divisions, tribal politics and polarities.

While political support is the same as elsewhere, this pretty and prosperous town on the banks of the Erne has never had had the sectarian edge of Belfast or Portadown to the east. The communities sit with each other more easily here.

You speak to people from a nationalist background who are proud that DUP leader Arlene Foster, “a local woman”, became the First Minister. Those working in local politics say there are occasional flashpoints, but as a rule, councillors tend to row together, rather than row among themselves.

But the meltdown over the past 48 hours is not your usual Northern crisis. For once, it has nothing to do with the peace process. It is rather an old-fashioned “waste-of-public money” scandal.

It would be churlish to expect people to abandon their own political fealties over this. As Maurice Kennedy, editor of the Fermanagh Herald, observes: “It’s a very tightly-balanced constituency between nationalist and unionists and you get a tribal phenomenon in elections here where people revert to type.”

That said, Kennedy has noticed “a growing wariness among younger people and a voter apathy that I have not encountered before”.

Among people who don’t consider themselves political, there is outrage over the wastefulness. Kennedy and others say the the DUP has been damaged.

“Sinn Féin too has not emerged unscathed from it,” he says.

“A lot of young nationalists feel that both parties have been going easy on each other in terms of political expediency.”

One such person is bar manager Paul Blake, who is an SDLP supporter. Like many, he has a view of the DUP leader that is not binary.

“Arlene Foster is local. She has done great things for Fermanagh and keeping it on the agenda.” But then he says she is “kiboshed” by the scandal over the renewable heat incentive. He said that by being stubborn and not allowing a proper investigation, she backed herself into a corner.

That’s not the DUP view. In its pristine office on East Bridge Street, dozens of cards and bouquets have come in.

“The people I’m speaking to, a lot of them are definitely behind Arlene,” says local DUP councillor Keith Elliot.

Sinn Féin councillor Barry Doherty does not see it that way. “People are very exercised by the scandal. It’s not only political people. When you take the size of the North and put the amount of money in context, it’s enormous.

“ We need some degree of a new departure in Northern politics at the moment – it can’t simply be just orange-green any more,” he says.

He says there is a lot of annoyance with Foster, perceived as being “dismissive” of the aspirations of half of the community.

For Doherty, Brexit is too gargantuan a problem and too much of a concern to allow stagnation. But he sees little alternative . “We are certainly facing into period of uncertainty in Stormont politics,” he predicts.

SDLP MLA Richie McPhillips says the reaction of people in Co Fermanagh to the crisis has been one of disgust. Asked if it has damaged Foster, he says she showed little humility before Christmas but seems to have mellowed since then. He also believes Sinn Féin’s credibility has been damaged.

His prediction echoes that of most others: “What will we be left with? A downsized Assembly with the same two power blocs, and probably a more entrenched situation.”