Taoiseach speaks to European Commission president about pandemic and Brexit 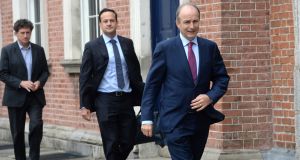 Boris Johnson has congratulated Micheál Martin on his appointment as Taoiseach and promised to implement the Northern Ireland protocol that forms part of Britain’s withdrawal agreement with the EU.

Downing Street the prime minister discussed coronavirus, the negotiations on Britain’s future relationship with the EU and global issues during a call with the Taoiseach on Tuesday evening.

“He underlined the closeness of the relationship between the UK and Ireland, and the two leaders resolved to work closely to further strengthen links between our countries. They also discussed the importance of cooperation on issues such as climate change, particularly when Ireland takes a seat on the UN Security Council next year,” a Downing Street spokesperson said.

“On coronavirus, the prime minister and Taoiseach agreed on the need for a sustainable economic recovery. They agreed to continue working together to drive that recovery in the UK and Ireland.”

British and EU negotiators are meeting in Brussels this week for their first round of face-to-face negotiations for months. EU negotiators have signalled their readiness to compromise on the issues of access to British fishing waters and “level playing field” commitments to ensure fair competition by maintaining agreed standards on employment rights, the environment and state aid.

Mr Johnson has called for a deal to be done by the end of the summer, although he has not identified a firm deadline and he told the Taoiseach that Britain would not budge on its fundamental approach to the negotiations.

“On the UK’s departure from the EU, the prime minister stressed his determination to reach an agreement as soon as possible but emphasised that the UK’s fundamental principles will not change, and explained that the UK remains committed to implementing the Northern Ireland protocol. The prime minister and Taoiseach looked forward to meeting in person in the future,” the spokesperson said.

Mr Martin also spoke by telephone with the President of the European Commission Ursula von der Leyen on Tuesday afternoon in a call that covered the pandemic response, the forthcoming EU budget negotiations and Brexit, Government Buildings said this afternoon.

In a tweet, Ms von der Leyen said she had a “good first call with Taoiseach” Micheál Martin

“We agreed to work closely together to make Europe stronger, greener, more digital,” she said.

Government Buildings confirmed that Mr Martin had also spoken with the EU’s chief Brexit negotiator Michel Barnier, who briefed him on the state of the ongoing Brexit negotiations and the prospects for an agreement in the autumn.

“They had good and productive discussions,” the Government spokeswoman said. She said the two men agreed that the EU should seek an agreement that was balanced, but which reflected the EU priorities.

She also said that the two men agreed that there should be “effective implementation” of the special arrangements relating to Northern Ireland as soon as possible.

Face-to-face Brexit negotiations began in Brussels this week after months of virtual meetings which have seen little progress on a trade agreement. Unless there is agreement by the end of the year on a trade agreement - a prospect there is little optimism about in Brussels - the UK will leave the EU’s trading bloc at the beginning of 2021 and trade relations will default to WTO rules, meaning significant tariffs on important and exports.

Officials are also understood to be seeking to set up a phone call with the British prime minister Boris Johnson.

Mr Martin spoke earlier in the week to the Northern First Minister Arlene Foster and the Deputy First Minister Michelle O’Neill and officials from Dublin and Belfast are understood to be in contact about arranging a face-to-face meeting in the coming days, likely to take place in the North.