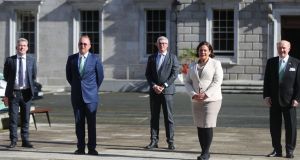 The Seanad voted by 31 votes to four in favour of Sinn Féin returning most of an almost €4 million donation received from the estate of English man William Hampton.

The vote, which has no legal effect, came at the end of a highly personalised two-hour debate on political funding in the House, targeted at Sinn Féin. It followed bitter Dáil exchanges on Tuesday during a no-confidence motion in Tánaiste Leo Varadkar tabled by the party.

Barry Ward, Fine Gael’s Seanad justice spokesman, accused Sinn Féin of “moving away from support for measures that restrict the number of donations that can be given to political parties”.

Under Irish law, €2,500 is the maximum political donation an individual can give to a party. However, in Northern Ireland there is no limit to the amount a donor can give a party. Mr Hampton, who inherited a significant estate, died in Wales in January 2018. His donation to Sinn Féin is the largest ever received by a political party on the island of Ireland.

Sinn Féin Senator Niall Ó Donnghaile claimed his party was being “criticised for adhering to its legal requirements” as he accused Fine Gael and Fianna Fáil of exploiting partition to “play cheap and cynical games”.

Mary Lou McDonald, the Sinn Féin leader, had in correspondence with the Standards in Public Office Commission (Sipo) said the ethics watchdog had no jurisdiction over the donation as her party operated separately on “a six-and 26-county basis”. She said the donation was not offered to, or accepted by, her party in the State.

Mr Ward said Mr Hampton’s will “specifically states that the donation is for ‘the political party in the Republic of Ireland known at this time as Sinn Féin’”.

He said there was no meaningful way “to ensure that research, social media and political staff funded in Northern Ireland by this donation are not employed in this jurisdiction or that their work is not deployed here”.

Mr Ó Donnghaile, the only Sinn Féin Senator who spoke during the debate, said his party had made it clear that the donation would only be used in the North.

He criticised Fine Gael proposals to give Sipo powers to ensure that any party operating in Ireland, regardless of jurisdiction, adheres to Irish law. He said that said if Fine Gael really wanted to give Sipo new powers, it should give the watchdog “powers they actually want”.

Mr Ó Donnghaile pointed to the resignation of former minister of state Michael D’Arcy, who quit the Seanad to head up an investment managers lobby group, and said Sipo had made 22 separate recommendations asking for stronger lobbying enforcement powers.

He said Mr Ward had, while a councillor, “claimed over €10,000 of public money for a college course. This drew sharp criticism from Sipo,” because civil legislation did now allow for councillors to reclaim the cost of third-level degree courses.

Responding, Mr Ward said the 2012 annual Sipo report “specifically exonerated me of any wrongdoing in respect of that matter. They stated that there was no basis on which to pursue the matter” and concluded that “there was a legal basis for what happened”.

Fine Gael Senator Emer Currie said Sinn Féin “pride themselves on standing up for ordinary workers, but they are the party of big money.

“They pride themselves on being an anti-partitionist 32-county party, but they are partitionist when they want to be.”