Inside Politics: All major parties see the new US president as a friend of Ireland 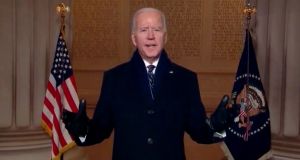 It was not so much a torch that was passed from US president 45 to 46 but an incendiary device. By the time Donald Trump finally and reluctantly agreed to pass it over, the invasion of the Capitol Buildings had occurred, and with it a strike at the heart of American democracy.

Biden’s first job after being sworn in yesterday was to begin douse the flames of the Trump years. And he started quickly. By the time the former president had settled back into his Florida resort, Biden had signed 17 executive orders, designed to undo the major changes of the MAGA agenda. One of the most important was to sign the US back into the Paris climate accord. He also reversed the ban on people travelling from certain Middle Eastern countries, and stopped work on the infamous border wall with Mexico.

6 We said: ‘This is life and death, and we owe the Irish people’

7 Home office, home bar and scope for another home alongside for €1.55m

11 Gordon Elliot should take break to ‘get life back in order’, says Ted Walsh

19 Rupert Murdoch at 90: Fox, succession and ‘one more big play’

21 Long Covid in children: New data is cause for concern, scientists say

25 Three arrested as gardaí break up street party in Limerick

26 Bill Gates: ‘I’m not trying to take anything away from Greta Thunberg, but...’

27 Michael Harding: ‘Thank you for your love,’ I wrote to a friend. Then I tore it up

28 Summer tourist season at risk with Covid passports months away

33 Róisín Ingle: I told my children about my new handsome friend. They accused me of cheating

35 Irish in Australia: ‘It’s scary here, not able to visit home at the drop of a hat’

36 Covid-19 one year on: The story of the virus in five infographics

38 Fabien Galthié cleared of any wrongdoing for leaving bubble