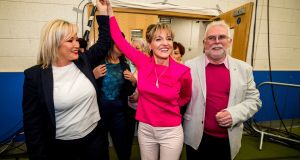 As so often at election results time, the faces said it all. In the South, a grim result for Sinn Féin was mirrored by equally grim expressions; in the North, there were smiles, hugs and plenty of cheers.

Party leader Mary Lou McDonald and northern leader Michelle O’Neill were among the large contingent of MPs and MLAs who were present in the Meadowbank Sports Arena in Magherafelt, Co Derry, to congratulate their candidate, sitting MEP Martina Anderson, on her re-election.

Five years ago, Anderson topped the poll. She did so again on Monday, though with 30,000 fewer first-preference votes and a 3.3 per cent drop in vote share. In 2014 she reached the quota on the first count. This time she was the third and final candidate to be elected, behind the DUP’s Diane Dodds and Naomi Long of the Alliance Party.

“Sinn Féin doesn’t go for topping polls,” said Anderson. “What was crucially important, and what was more significant, is that two remain candidates were returned.”

In this respect, it was mission accomplished. In the North, this was the election that was never supposed to happen. When it became apparent less than two months before polling day that European elections would take place in the UK because of the delayed Brexit process, the vote in Northern Ireland immediately became a battle between leave and remain.

With Anderson holding what was regarded as a safe Sinn Féin seat, their voters were encouraged to give their transfers to other remain candidates. Among most of the party faithful, this meant giving Alliance their No 2 vote.

“She’s not a nationalist and I don’t think she’s looking towards a united Ireland, but she’s bringing a voice that is maybe disillusioned with orange and green politics and is anti-Brexit,” said one party member. “Those voters are out there, and Naomi Long is probably their best representative.”

Another – who also gave Long a second preference – admitted it was the first time he had ever given a vote to Alliance. “Naomi Long comes across as if she’s on top of everything. She’s very impressive,” he said. “Alliance are a pro-remain party, and my gut feeling was that they had a better chance of taking the seat than the SDLP.”

According to Anderson, this – coupled with the lower turnout – explained the drop in Sinn Féin’s first preferences. “People voted tactically,” she said. “We asked people to vote all the way down the remain ticket and it has worked.”

Sinn Féin’s ongoing bid to dominate nationalist representation in the North may also have played its part in transfers. Few would deny it suits Sinn Féin to share the European stage with Alliance rather than the SDLP.

According to SDLP leader Colum Eastwood, Sinn Féin’s transfers to Alliance “probably had more to do with us than with politics changing”.

“I don’t have a great deal of love for the SDLP,” is how one former Sinn Féin elected representative put it. “Alliance are a far better option.”

Yet the SDLP’s share of the vote was up slightly, by 0.7 per cent, and their tally, according to Eastwood, showed the party received “around 53 per cent of the Sinn Féin transfers. They didn’t come into play, but a much lower percentage, in and around 20 per cent, went to Alliance.”

“I voted SDLP 1, Alliance 2 and Sinn Féin 3,” said one habitual Sinn Féin voter. “Sinn Féin were going to get in anyway, so it was about getting two Remain candidates in, and at the end of the day I’d rather have a nationalist so I put the SDLP as my first preference.”

Alliance clearly benefited from the increase in support for the party evidenced in the local elections earlier this month, which saw them gain 21 seats, as well as the collapse of the Ulster Unionists, who had formerly held the third European seat.

“The prevailing narrative was that Naomi was best placed to take it,” says Eastwood. “I think a lot of people voted tactically for her, but a large part of it was also that liberal unionist vote.”

If there was a sense that something had changed in the alignment of the North’s politics – not least through the election, for the first time, of three female MEPs – Eastwood cautions against reading too much into the result.

“I wouldn’t get too excited about a massive shift in politics in the North. I think things here change much more slowly than that. If people are thinking slightly differently about their votes, I think that’s good.”

Where that massive shift did come was in the Republic. It was a disastrous election for Sinn Féin, with a loss of half of its local authority seats, and a drop in its share of the vote from 15.2 per cent to 9.5 per cent.

Speaking at the Northern Irish count, McDonald acknowledged it had “had a very tough weekend ... We need to decipher the political lessons from that.”

O’Neill cited a number of factors, including the Green Party resurgence and low turnout in working-class areas and affirmed her support for her party leader.