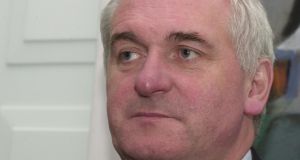 Bertie Ahern: said he would consider rejoining the party but insisted he would not run for election again

Former taoiseach Bertie Ahern has said he will consider rejoining Fianna Fáil as an “ordinary member” if his local organisation wishes him to do so.

Mr Ahern told The Irish Times that members in the Dublin Central constituency are focusing on winning his old seat back for the party and believe he could help them.

The prospect of Mr Ahern rejoining Fianna Fáil places leader Micheál Martin in a difficult position. Mr Martin sought to expel Mr Ahern in 2012 over the findings of the Mahon tribunal, although the former taoiseach resigned first.

Numerous sources said Mr Martin would likely have to personally approve any bid by Mr Ahern to rejoin even if an application may technically have to be considered by the national executive. Mr Martin’s spokesman has declined to comment.

The tribunal found Mr Ahern failed to truthfully account for a number of financial transactions, but did not make a finding of corruption against him.

Following the tribunal findings, Mr Martin said that while the “central allegation” against Mr Ahern was “not sustained, the evidence confirmed by the tribunal and its comments relating to him are extremely serious”.

Mr Ahern said he was unaware that a motion was going to be tabled at a constituency meeting in the Skylon Hotel in Drumcondra, Dublin, earlier this week inviting him to return.

He was in Ukraine at the time working with Crisis Management Initiative , a non-profit organisation.

Mr Ahern insisted he was unaware that Mr Wall, supported by Brian Mohan, another ally of the former taoiseach, was going to table the motion. He said he would consider rejoining the party but insisted he would not run for election again.

“It would be just as an ordinary member,” said Mr Ahern. “I didn’t know anything about it, but when they do approach me, I’ll think about it.

“What they are doing, and I agree with them, is they are trying to win a seat in Dublin Central and Dublin North West. They know I know a lot of people in the area and would have influence in the area.”

He pointed to the work he had done in recent months in helping to resolve a dispute between the GAA and the management committee of the Irish Handball Centre behind Croke Park.

He said people such as Mr Mohan and Mr Wall were also seeking to work with others such as former TDs Dermot Fitzpatrick and Cyprian Brady to try to win back a seat for Fianna Fáil.

He says he still sees Mr Martin at events and functions. “I have a friendly relationship with him.”

One disagreed, however, saying “he left because of Mahon, Mahon hasn’t changed”.

Another said the Mahon tribunal was “flawed” and Mr Ahern, as a three-time general election winner, should be listened to.

There are contesting views over whether Mary Fitzpatrick, a councillor and former general and European election candidate who has clashed with Mr Ahern’s supporters in the past, was present when the motion was tabled.

Some sources insist she was, while others say Ms Fitzpatrick had left to attend to family business and was later informed of the development by a phone call.