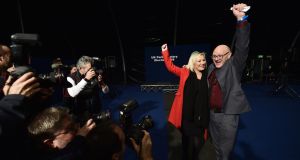 The outgoing Sinn Féin MP Paul Maskey was easily returned in Belfast West, elected with a sizeable majority of 14,672 votes over his nearest rival, Gerry Carroll of People Before Profit.

Mr Maskey took over the seat in 2011, when the former Sinn Féin president Gerry Adams moved to Louth to concentrate on advancing the party’s fortunes south of the Border.

Two years ago Frank McCoubrey of the DUP took second place, but this time that accolade went to Mr Carroll, who won 6,194 votes. That will consolidate People Before Profit’s standing in Belfast West, where Mr Carroll is a member of the Northern Ireland Assembly.

Mr McCoubrey took third place, on 5,220 votes. Next was the SDLP candidate, Paul Doherty, on 2,985 votes, followed by Donnamarie Higgins of the Alliance Party, on 1,882 votes, and the former Sinn Féin councillor Monica Digney, now of Aontú, on 1,635 votes.