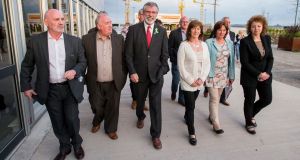 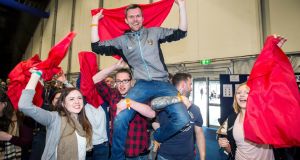 Gerry Carroll of People Before Profit alliance is hoisted high after being elected as MLA for Belfast West at the Titanic Exhibition Centre in Belfast. Photograph: Liam McBurney/PA Wire 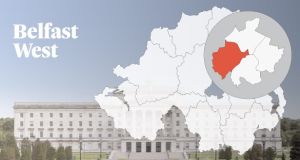 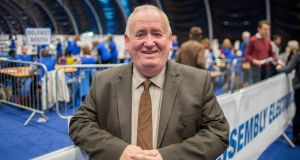 Alex Attwood of the SDLP has kept his seat in the Belfast West constituency, with 4,430 votes.

The DUP’s Frank McCoubrey was eliminated on the final count with 4,341 votes.

Jennifer McCann of Sinn Féin was elected at stage six of the Belfast West count, with 5,750 votes.

Sinn Féin’s Fra McCann was earlier elected in Belfast West with 5,892 votes at the fifth stage of the count.

Sinn Féin’s Rosie McCorley was excluded on the third count in Belfast West so the party will not be returning to Stormont with five seats in the constituency.

Alex Maskey took the second seat in Belfast West for the party, with 5,361 votes in the second count.

Earlier, Gerry Carroll became the first People Before Profit politician to be elected to the Northern Ireland Assembly.

The 28-year-old topped the poll in the constituency with 8,299 votes.

In his podium speech, Mr Carroll had a message for Taoiseach Enda Kenny and Fianna Fáil leader Micheál Martin.

“No doubt much will be made in the South about this election result.

“West Belfast has a clear message for Tweedle Dee and Tweedle Dum in Leinster House, or Micheál Martin and Enda Kenny as they call themselves.

“You have nothing to celebrate about with this election result because the austerity the people of west Belfast are opposed to is the same austerity impacting on people South of the Border.

“There is a spectre. A spectre of establishment North and South - and it’s based on socialist politics and people power.

“A day of reckoning is coming and it’s coming soon for people who are pushing austerity.”

Speaking after his election, Mr Maskey said he was proud and honoured to represent the community in the area.

He said: “Sinn Féin has topped the poll in west Belfast. That is something we are very proud of. We have worked very hard with the people.

“West Belfast is a great community and a great constituency. I am proud and honoured to be a representative of it. I have lived there for decades and I will die there in many years to come. It has been decried by far too many people, who would need a sat-nav to find it.”

Mr Maskey spoke of his pleasure regarding the number of young people he said are supporting the party in west Belfast.

He pledged to “deliver the services the people are entitled to”.

“We have already been putting a lot of money in through education, the DCAL [Department of Culture, Arts and Leisure] Minister, the money for Casement [Park GAA stadium] and a lot of other money for sporting facilities.

“We need to get more jobs into west Belfast, more social and affordable housing.

“I on my own constituency books could house an entire area with the people who need a home in west Belfast.

“For me, I will be wanting to focus on employment, facilities, the community sector needs sport and the sporting fraternity, which I believe is one of the best examples of endeavour in west Belfast that we have seen and doesn’t get proper account for.”

Mr Carroll had been the only candidate to reach the quota of 5,182 on first preference votes.

Mr Carroll said: “I would like to thank the people of west Belfast for voting for me and to my campaign team for all their support.”

He believes people are dissatisfied with “the status quo at Stormont” and is looking forward to taking his seat.

“People are fed up with poverty and deprivation as big business get handouts,” he said.

At this stage it looks like Alex Attwood could hold his seat for the SDLP.

The sands have already shifted in west Belfast to such an extent that the Green candidate, 22-year-old Ellen Murray, made history by becoming the first transgender person to stand for election in the North.

He also ran for the Assembly in 2011 and polled 1,661 votes, but a strong campaign team and disaffection with the political status quo, particularly from younger voters, has resulted in his political rise.

His big breakthrough was in 2014 when he was elected to Belfast City Council, an achievement that heightened his profile considerably.

He describes himself as neither nationalist nor unionist, but as a “revolutionary socialist”.

Apartment owner who paid €16,000 for defects will not ‘fix it quietly and go away’ 10:59
Fianna Fáil promises €10m redress fund for Celtic Tiger building defects 10:59
Feud making life ‘unbearable’ for some in Drogheda, mayor says 10:58
Snow on the way as Ireland’s weather set to turn colder 10:48
New culture trying to ‘undo truths’ of Christianity, bishop says 09:57
SUBSCRIBER ONLY