Battle on doorsteps reveals different truths for Yes and No campaigns

Both sides in abortion referendum believe they have the edge. How can both be right? 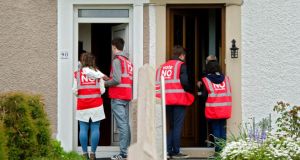 When you ask Joe Walsh, a No campaigner, when he started canvassing for the referendum on the Eighth Amendment to the Constitution, his response takes you aback. “We started three years ago,” he says, matter-of-factly, “and have not stopped since then.”

Although the media spotlight over the past five years has been mostly on the evolution of the referendum to decide whether to repeal the amendment, which bans abortion in almost all circumstances, anti-abortion campaigners have not been idle, as is immediately apparent outside Dublin. The No campaign was first to put up its posters, and it has big canvassing teams, in which young women tend to be to the fore, in most parts of the State.